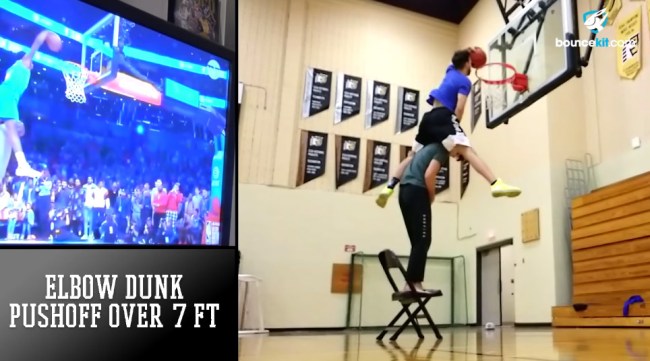 Remember Birdman Andersen’s horrible showing in the NBA Dunk Contest back in 2005 when he took 15 attempts to complete two dunks? That was probably the worst attempt in the history of the Dunk Contest (though there are several other failed attempts that also belong in the conversation).

The 2019 edition of the NBA Dunk Contest, won by 20-year-old Oklahoma City Thunder guard Hamidou Diallo over the other finalist Dennis Smith Jr., did not have any dunk attempts nearly as bad as Birdman’s, but still, there were a few fails.

So just to show us how EVERY dunk in the 2019 NBA Dunk Contest is supposed to be done, professional dunker Jordan Kilganon (yes, that is a thing… he’s even done MoCap work for NBA 2K19 – see video below) put together a video compilation showing himself attempting, AND COMPLETING, every dunk attempt from this year’s event.

Much like The Professor and The Bone Collector, Kilganon is one of those playground legends who travels around showing off his specific basketball skills for a living.

For some point of reference, Kilganon, who is named after Michael Jordan, showed up to the NBA All-Star Game festivites in 2016 and blew the crowd away, throwing down a scorpion dunk (while wearing blue jeans).

Asked in 2016 if it would be a sure thing that he would win the NBA Dunk Contest if he were allowed to enter it, his response was, “Yeah, absolutely. I mean, their job is to play basketball. My job is to dunk. So I hope I would win.”

After you see the video below of him recreating all of this year’s dunks, I think he’s probably right.