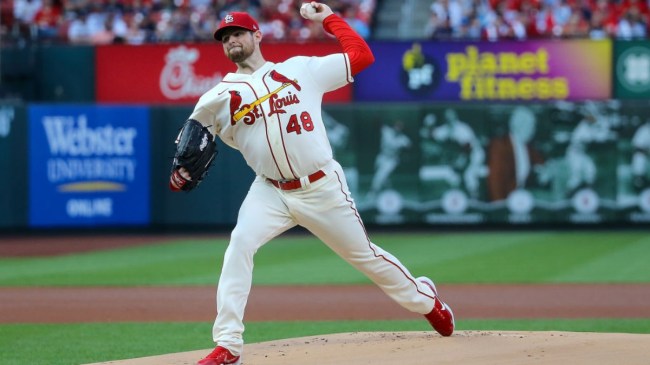 However, that’s exactly what they did when they traded Jordan Montgomery to the St Louis Cardinals. To make the trade even more surprising, they traded him for Harrison Bader, an outfielder who hasn’t played a game since the end of June due two an injury.

Last night, after another great start for the Cardinals where he pitched 6 scoreless innings against the Cubs and picked up another win, Montgomery was asked about the trade.

Montgomery answered the question by pretending to not remember being traded.

#STLCards LHP Jordan Montgomery was asked about his improvements since being traded by the #Yankees. He said: “What trade? I don’t know what you are talking about. I don’t remember a trade. I’ve turned the page & I’m excited to be here. Every five days I want to go out & win.”

Montgomery has to be loving the way this trade has played out. While he has been lights out on the mound for the St Louis Cardinals, the Yankees have struggled to find consistent starting pitching.

Since the trade deadline, the Yankees have fallen out of the MLB’s top spot and are now even look like they could possibly lose the AL East race. Meanwhile, the Cardinals have been playing some of their best baseball and look like a lock for the NL Central title.

The Cardinals are only 2 games worse than the Yankees heading into today’s action and have recently looked like they might outlast Montgomery’s former team in the playoffs.