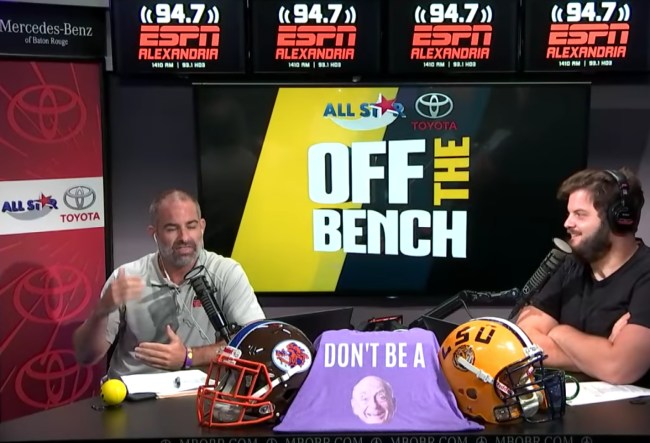 Dick Vitale is one of those guys on TV who has been ‘old’ for my entire life. He seemed ancient from the first time I saw him on camera for a UNC-Duke game. I actually think Dick Vitale is a pretty great guy. I see him around town (Sarasota) all the time and he’s extremely polite to the strangers/fans that approach him. He sat behind me at a Tampa Bay Rays playoffs game last season and I watched as he glad-handed every security guard and staff member in the area like an old mafia guy walking into a restaurant in New Jersey.

He seems great in person, but on Twitter he’s beyond insufferable.

Many of his tweets are completely nonsensical. I unfollowed him a LONG time ago because it was impossible to discern his tweets as an ESPN college basketball analyst from a senile boomer who needed to have his phone taken away.

One thing that Dick Vitale’s been tweeting about A LOT recently is an alleged ‘pay for play’ LSU Basketball scandal which first began to make headlines back in March. Jordy Culotta is a radio host for ESPN’s Off The Bench (1045 ESPN / ESPN Radio NOLA) and he went scorched earth on the aging Dick Vitale for tweeting about things he has no business talking about. It’s actually quite refreshing to see an ESPN employee speak so candidly about a colleague.

The Twitter clip is condensed to just 2:11 and the YouTube clip below that is the full 4-minutes:

Dick Vitale (@DickieV) continues to attack @LSUBasketball on twitter. @JordyCulotta GOES OFF on Vitale for his most recent comments against #LSU.

Here are some of Vitale’s recent tweets about LSU Basketball so you can get a sense of the situation:

FYI to fans that r lovers of @APlayersProgram & @LSUBasketball I am only reporting what I believe to be factual. I wish no one ever violates the rules but there r those that try to get a winning edge by doing whatever it takes to win at all costs & violate @NCAA rules .

My latest update on @APlayersProgram & @LSUBasketball in respect to @NCAA The delay in allegations sent to both has been caused by the COVID-19 pandemic. Arizona will receive their NOA (notice of allegations ) this month . They will include major Level 1 charges .

Now for LSU there is a process The INDEPENDENT RESOLUTION PANEL that the @NCAA or school ala LSU has a right to request to study the info from an investigation. It will take time but when finished the NOA will arrive.Source says no doubt Level 1 major charges will arrive.

My last comnent to the LSU fans.I’ve stated that due to the COVID-19 & the inner workings technically in investigating a school by the @NCAA has created a delay . Nothing has changed per my reliable source as major charges from the NCAA ( not me)will happen.

As pointed out by Reags from Barstool Sports, this isn’t the first time that LSU radio personalities have gotten into it with the 81-year-old Dick Vitale and based on that clip above this appears to be a situation that’s only going to escalate unless Dickie V puts down his phone and stops tweeting.