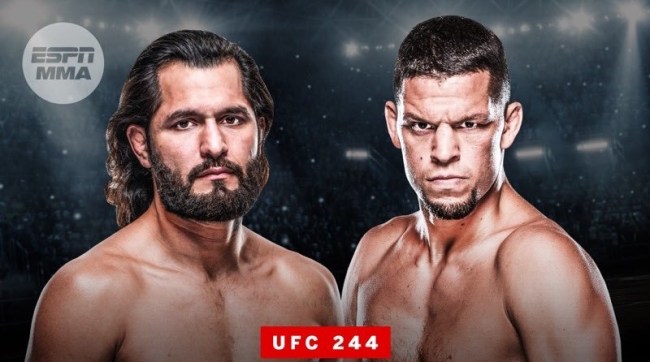 What a difference a year makes.

At this time last year, welterweight Jorge Masvidal was taking a year long hiatus from mixed martial arts, participating on the Spanish-only reality competition show “Exatlon Estados Unidos” while growing his hair out. One year later, he’s headlining the UFC 244 Pay Per View main card on ESPN+, taking on Nate Diaz for the UFC’s first and only BMF title.

Jorge “Gamebred” Masvidal has always been a fighter’s fighter. That’s basically how he found himself in the whole BMF title mix in the first place, basically because Diaz respects the hustle and Masvidal has been putting in work for the last 15 years. And to think, after 47 pro MMA fights and countless backyard brawls as part of the Kimbo Slice crew in Miami, Masvidal is having the best stretch of his career, and is on the cusp of being named the 2019 Fighter of the Year.

Looking at Masvidal’s 2019 campaign, it all kind of begins with the 16 months he took off, in which “Gamebred” was able to rest and recoup after back-to-back losses in 2017.

The time away from MMA allowed Masvidal the opportunity to get his body and mind right, and when he returned to the Octagon in March 2019 for a main event spot in London against top contender Darren Till, everyone was happy to see Masvidal back, although no one was expecting him to put on the type of show he did.

Brutally knocking Till out in the second round with a stutter step-in hook, Masvidal earned his second KO of the night when he nonchalantly walked away from a post fight interview to dish out a “three piece and a soda” combo to an unsuspecting Leon Edwards.

While the Edwards scrap will never find it’s way to Masvidal’s pro record, the backstage fisticuffs demonstrate what Jorge “Gamebred” Masvidal is all about, which is fighting and respect … and a zingy catchphrase.

Riding the Till knockout and the “three piece” line all the way to the UFC 239 Pay Per View main card, what Masvidal did next will forever go down in UFC history as one of the greatest knockouts of all time. It will also go down as the fastest KO in UFC history, as Masvidal needed all of five seconds to absolutely obliterate Ben Askren with a picturesque flying knee and follow up punches. It was a thing of beauty that caused Masvidal’s stock to completely skyrocket. It’s amazing how five seconds can change someone’s life.

Prior to 2019, Masvidal was always considered a journeyman fighter. No doubt a fan favorite, Masvidal has always been an exceptional boxer, but he was never considered to be a real threat to capture the title after coming up short for the Strikeforce lightweight belt in 2011. His style has always been exciting, but having ended up on the wrong side of too many judges decisions, he always seemed to drop a few crucial fights after climbing the ranks.

Even as recently as 2016-2017, Masvidal inched closer and closer to a welterweight title shot with an impressive knockout over Donald “Cowboy” Cerrone, but back-to-back losses to Damian Maia and Stephen “Wonderboy” Thompson would end that run, and that’s when Jorge Masvidal decided to take his 16 month hiatus.

Now back and in the best form of his career, Masvidal is on the verge of winning a UFC title unlike any other: the UFC BMF belt. Perhaps, like his Tony Montana suit, it’s a novelty, but the BMF title perfectly encapsulates what fans of combat sports covet: the warrior spirit.

And boy is Jorge Masvidal one hell of a warrior.

Should Masvidal take out Nate Diaz in the UFC 244 PPV main event to claim the UFC BMF title, it will signify one of the most improbable career trajectories in UFC history, where a fighter has gone from near irrelevance to a superstardom so unique that a belt was created just to explain how important he is to the sport of mixed martial arts. And with the win, Jorge Masvidal very well could end up as the 2019 MMA fighter of the year.