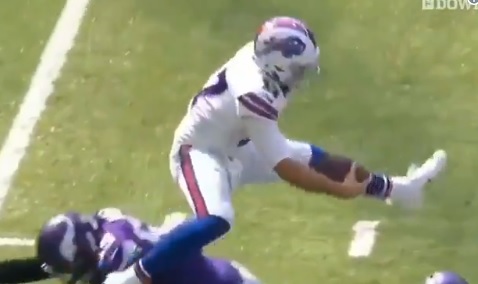 Before today’s Bills-Vikings game, Bills QB Josh Allen revealed that he wanted to get off to a fast start against one of the league’s best defenses.

“That’s statistically one of the best defenses in the league for the past couple of years. [It’s] a new stadium, and I heard it’s pretty loud in there. Those fans are going to be pretty amped up.” Allen said. “They’re a well-coached team [with] a lot of vets on that side of the ball, so we have to come in, like I said, start fast, [and] just try and control the elements there.”

Despite being a rookie it seems like everything is going according to his plan. In the first half of today’s game, Allen is 7/10 for 120 yards as the Bills are up 17 to nothing.

While everyone knows about Allen’s huge arm, the rookie QB is also showing off his scrambling ability today.

Watch as Allen straight up hurdles Vikings’ Anthony Barr on a play.

Josh Allen with the FLEX pic.twitter.com/9CtzGBuago

The Internet was impressed with Allen’s hurdle.

Not just any dude, either. Anthony f'n Barr.

A JOSH ALLEN HURDLE OVER ANTHONY BARR? THERE HAS TO BE A GLITCH IN THE SIMULATION

A HURDLE!????? JOSH ALLEN YOU DONT NEED TO MURDER THEM LIKE THAT

Anthony Barr will have nightmares about Josh Allen tonight. Getting stiff armed, hurdled, and beat to the goalline yikes

A HURDLE. FROM A QUARTERBACK.