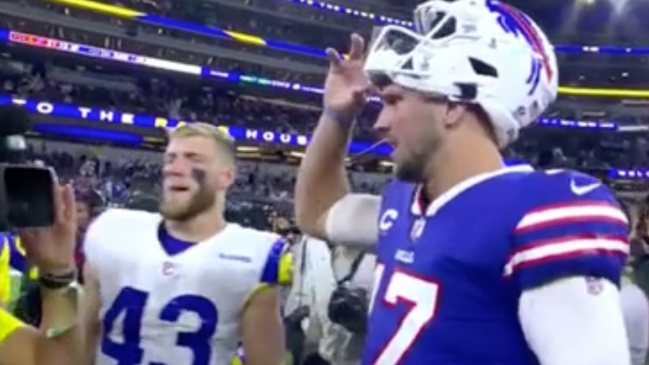 Most people knew the Bills had a pretty stacked team heading into their season opener against the Rams on Thursday night, and Buffalo made it very clear they’re going to be a force to be reckoned with this year by walking away with an incredibly decisive 31-10 victory over the defending Super Bowl champions.

It should come as no surprise that Josh Allen played an instrumental role in the win, as the quarterback picked up where he left off last year by throwing for 297 yards, tossing three touchdowns, and running for another en route to racking up 56 rushing yards (which included a scramble where he stiff-armed Nick Scott into another dimension).

It’s easy to understand why some guys on the Los Angeles roster weren’t in a great mood after getting dragged on their home turf to kick off the season, and plenty of people speculated that group included Rams safety Jake Gervase thanks to an interaction where he appeared to snub Josh Allen on the field after the game.

Josh Allen tries to conversate with Jake Gervase who isn't having it. pic.twitter.com/XsSwV17ajG

Gervase was the first person to offer an explanation after replying to a now-deleted tweet, saying Allen asked if Tyler Hall was still playing for the Rams (the cornerback—who was teammates with Allen at Wyoming—signed a deal with LA in the offseason but was placed on waivers earlier this week).

Social media is wild 😂. @JoshAllenQB walked by and asked if his former Wyoming teammate, Tyler Hall, still played for us. I responded “nahh man”. Sheeeesh https://t.co/UK4z4sYS0D

Allen confirmed that account while replying to the same tweet around 20 minutes later, and Bills reporter Mike Catalana was kind enough to provide him with a receipt in the form of a video confirming their explanation of what went down.

This is what Josh is talking about pic.twitter.com/43K9cN63Fc

I can understand why NFL fans are craving some drama after such a long drought, but if history is any indication, there’s no need to generate fake controversies when you consider we probably won’t have to wait too long to be treated to a real one.