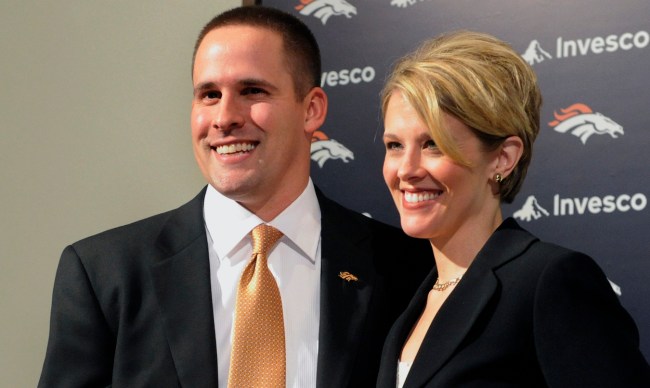 You see what I did there? I did that took that whole misogynistic headline thing (have you looked at J.J. Watt’s Twitter this week?) and I flipped it right on its damn head. Straight dunked on the sexist haters and losers. Bet you didn’t see that one come, social injustice. Point to the fuckin’ good guys on this lovely Friday morning.

Me dunking on the sexist haters

Anyway, my vaguely incoherent longing-for-the-weekend babbling aside, the point of this article is to inform you that New England Patriots offensive coordinator Josh McDaniels brought his wife Laura to Cleveland with him as he interviews for the Browns head coaching job.

Now, I don’t think this is necessarily a good or bad thing — in fact, I don’t think it’s anything at all, live and let live — but what I do know is that, in my 20ish years of watching football, I’ve never heard of such a move.

And, of course, when something like this — again, not good or bad, just unique — happens, it happens to the Cleveland Browns, who are (shockingly!) the only team left in the NFL yet to appoint a new head coach.

Patriots offensive coordinator Josh McDaniels is talking to the Browns today, and he’s bringing someone else who may have to be swayed. According to Albert Breer of SI.com, McDaniels’ wife Laura is on the trip with him today.

That may or may not mean anything, but it could be a sign that they’re trying to wrap things up today, as he’s the last candidate scheduled to talk to the team. There are plenty of dots to connect him to the job, not the least of which would be the Browns’ desperation for any degree of credibility.

But he’s a native of Ohio, and knows the area already, so if he’s bringing his wife along today, it may mean something more. [via ProFootballTalk]

Report: Josh McDaniels’ wife along with him for Browns interview https://t.co/tOxx2vrB1q

Considering that Laura did, in fact, tag along on the trip suggests that the McDaniels family is feeling pretty good about Josh’s chances of getting the gig.

McDaniels, now 43-years-old, last served as a head coach with the Denver Broncos from 2009 to 2010. However, when that opportunity didn’t pan out, he spent a year as the Rams offensive coordinator before heading back to run the Patriots offense in 2012.