So Many Feels: Raiders Rookie Josh Jacobs, Who Grew Up Homeless, Just Bought His Father A House 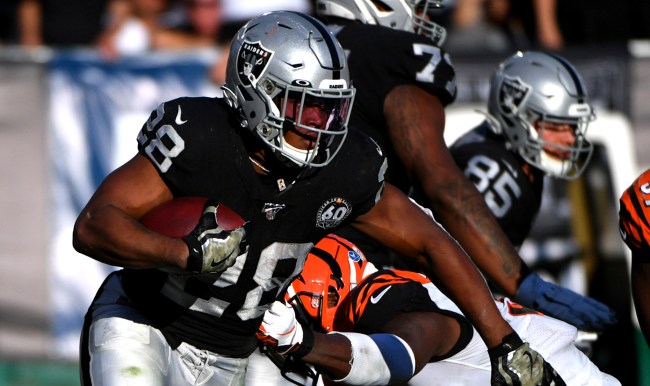 Former Alabama Crimson Tide running back Josh Jacobs has come a long way in his short life. The 21-year-old grew up homeless, sleeping in motels and spending many nights holed up with his four siblings in his dad Marty’s car.

Despite that difficult upbringing, Jacobs still managed to star for McLain High School in Tulsa, Oklahoma, leading him to Tuscaloosa on a scholarship from the University of Alabama where his college football career culminated with him being named MVP of the 2018 SEC Championship Game.

After a junior season where he scored 14 touchdowns on 140 touches for the Tide, Jon Gruden and the Oakland Raiders made him their first round pick, selecting him 24th – the first running back taken – in the 2019 NFL Draft.

This week, Jacobs bought his dad a house in Stillwater, Oklahoma.

“Why are you trying not to cry? You already crying, it already came out,” Jacobs could be heard telling his father in a video he shared of the touching moment.

An unforgettable gesture.@iAM_JoshJacobs thanked his father for his sacrifices growing by buying him a home in Oklahoma.

“Sleeping in the car, I always look back on it,” Jacobs said recently in a short ESPN documentary. “It’s always going to be something that molded me into who I am. It might have been rough, but, I mean, it’s my life.”

“I remember seeing him not sleep,” Jacobs told NFL Network’s Jeffri Chadiha ahead of the draft about his father. “It’s crazy because I didn’t notice that I was sleeping in a car. I was just thinking that I was falling asleep and waking up. I didn’t think anything about it because I felt safe. He would just drive around until he found a place to sleep and then I’d get up the next day and go to school.”

If that all sounds like something straight out of a movie, you’re not alone in that thinking.

Been getting offers on doing a movie about my story from big time producers. Idk what y’all think?

Unlike on the playing field, Jacobs is in no rush.

It definitely won’t be this year....

I think the stories only half written in due time 🤞🏽

Most Rushing Yards by a player 21-or-younger in their first 13 career games: