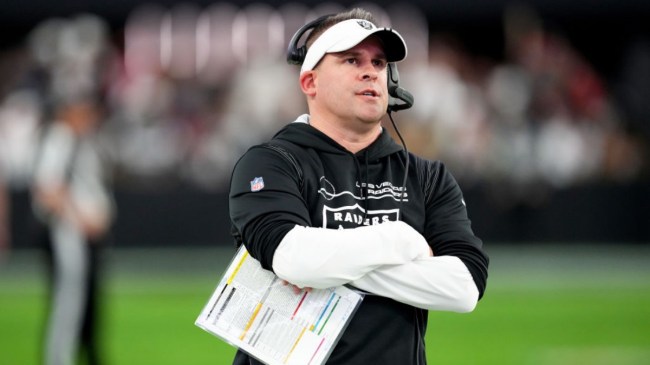 There was a short time a few years ago where it looked like Josh McDaniels was going to be the head coach of the Indianapolis Colts.

Back in 2018, the Colts were looking for a new coach after firing Chuck Pagano following a 4-12 season.

Meanwhile, McDaniels was coming off of another Super Bowl appearance as the offensive coordinator for the New England Patriots.

A couple of days after losing that Super Bowl, it was announced that McDaniels was taking the job as the new head coach of the Colts. By the end of that day, McDaniels had changed his mind and revealed he was staying with the Patriots.

At the time, there were many who believed this was because he was expecting to become the next head coach of the Patriots whenever Bill Belichick was ready to call it quits.

We now know that wasn’t the case as McDaniels ended up taking over as the head coach of the Las Vegas Raiders last offseason.

Now there’s a new story for why he changed his mind on the Colts job.

According to Outkick’s Dan Dakich, it was actually Josh McDaniels’ wife that didn’t want him to take the job after the couple had Colts owner Jim Irsay over and she noticed odd behavior.

My sources inside the colts GREAT

Got this today ⬇️

“McDaniel’s wife made him pull the plug after having Irsay in their home in Massachusetts & observing his odd behavior. Behavior that included being in the McDaniel’s family bathroom for a very long & awkward period of time.”

This certainly wasn’t the only head coaching search that was impacted by odd behavior for the Colts. Earlier this year, they made Jeff Saturday their interim coach despite him having no coaching experience above the high school level.

That was some very strange behavior.

Now the Indianapolis Colts are back in the market for a head coach. Hopefully nothing odd happens this time