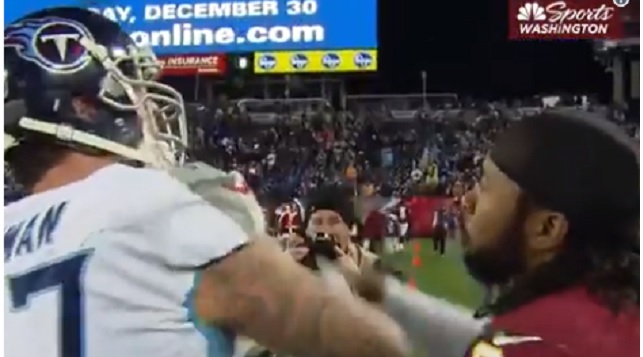 Things got a bit heated after this afternoon’s Redskins-Titans game.

After the Titans win, Taylor Lewan walked over to the Redskins sideline to tell Norman to “get the fuck out of my stadium”. Norman responded by throwing his helmet at Lewan and tried to fight him.

This dude Lewan did Norman's celebration right in his face 😭😭😭pic.twitter.com/VUeOJCIV5A

The Internet had some thoughts on the Lewan-Norman beef.

Footage of what would've happened if Lewan had actually engaged Norman. pic.twitter.com/fYtRLrhjyJ

Dishes it but can’t take it. Trash talk will always be a part of sports. He’s gotta live with giving up a lead to Blaine Gabbert, and throwing a tantrum b/c of Lewan. Poor guy had a rough night.

Norman's such a bitch. If Lewan wanted to he'd have fucked Norman up, Josh ain't shit. https://t.co/ehziHSyIL2