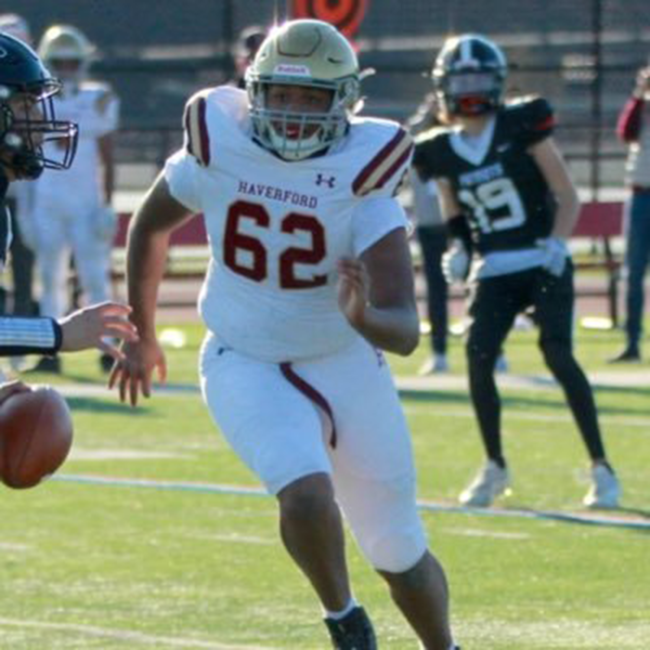 Joshua Williams still has three years before he has to come to a decision on where to play his college football. In the meantime, he is well on his way to earning the opportunity for a full ride at whatever school he chooses.

Williams is a rising sophomore at The Haverford School in Pennsylvania. He made varsity as a freshman and it’s not hard to see why.

At 6-foot-5, 280 pounds, Williams is already mauling opposing defenders as a blocker. He has also spent time at defensive tackle and even got to play some tight end. However, his future is on the line, and likely on the offensive line.

Although 280 pounds is undersized for the next level, he has more than enough time to put on some muscle and add some weight to his frame. When he does, Williams will be virtually unstoppable. He moves insanely well for someone of his size. Let me reiterate— insanely well.

Specifically, he runs the 100-meter sprint as both an individual and as the anchor leg sprinter on the 4X100-meter relay team.

As a reminder, Williams is nearly 300 pounds and 6-foot-5. And runs the 100-meter in 13 seconds, which is downright mind-blowing.

When Williams is chugging down the track, he is a freight train. Take a look:

His speed in the final leg of the 4X100 is equally as impressive.

Now, imagine being a defender on the gridiron who has to try and stand in Williams’ way as he gets moving downfield. It doesn’t sound like it would end well.

Williams is well on his way to becoming a top-ranked recruit if he can continue to channel his athleticism into his on-field play. He’s a monster in waiting.