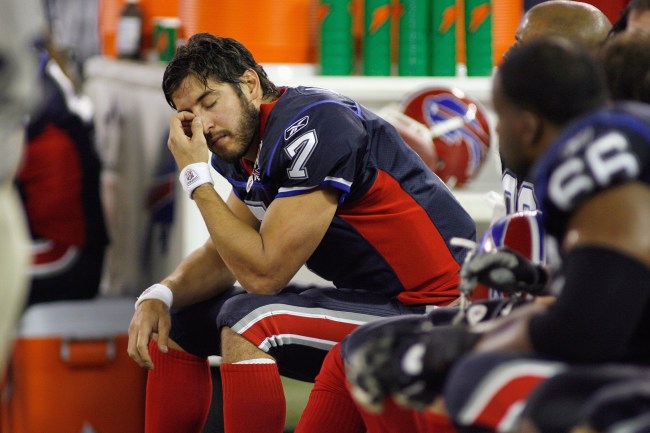 JP Losman was an absolute terrible NFL quarterback, guys. Drafted by the Buffalo Bills No. 22 overall in the 2004 NFL Draft, the Tulane product ended his NFL career in 2011 with 33 touchdown passes, 34 interceptions and a win-loss record of 10-23 in seven years in the league. If that’s not hard to look at, I don’t know what is.

Yet, here we are in 2019, and, according to ESPN’s Adam Schefter, an NFL team actually approached JP Losman about making an NFL comeback as a player after he was seen slinging the football all over the place during Clemson football’s Pro Day. I just checked the calendar and, surprisingly, the date isn’t April 1, so there was actually a team out there that didn’t approach Losman as a joke.

Former Bills’ QB JP Losman, now a 38-year-old offensive coach at Clemson, threw the ball to WRs/DBs so well at the school’s Pro Day today, that an NFL team actually asked him if he had any interest in coming back to the NFL, in which he last played a game in 2011. Losman declined

Is this what the NFL has come to? Seriously, JP Losman is 38 years old and hasn’t thrown a pass in the league in eight years, yet some team actually wondered if he’d be interested in making a comeback? Guys, how bad is the state of one NFL team’s quarterback position that this type of sh*t is happening?

This mirrors a similar story that broke earlier this year about current ESPN analyst Matt Hasselbeck — who’s 43 years old — being asked by a playoff-contending team if he were physically fit enough to join them during the 2018 season. Meanwhile, some guy named Colin Kaepernick can’t even get a phone call from NFL teams because owners are mad he kneels for the National Anthem. Good thing Kaepernick got that collusion money, because this whole JP Losman inquiry would’ve been all the proof he needed that the NFL was against him.

As Schefter mentioned, Losman’s an offensive coach on the Clemson Tigers, so, if he’s looking to win, he’s smart to stick around that team rather than try to get back into the NFL.