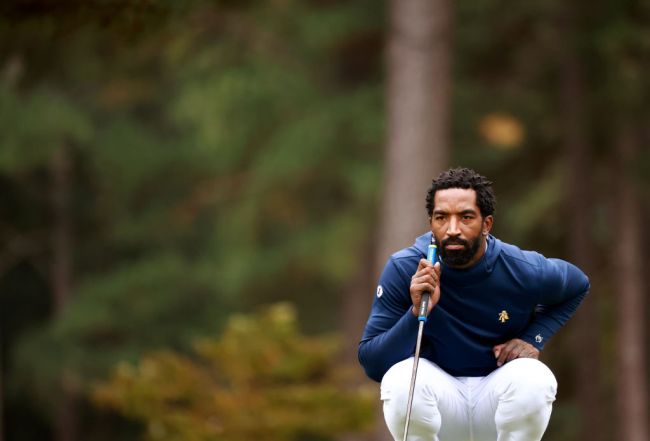 Former NBA guard J.R. Smith made his debut as a collegiate golfer on Monday and although the result was disappointing, he showed flashes of greatness and looked the part. The 36-year-old enrolled at North Carolina A&T before the fall semester with a goal of getting his college degree.

In addition to getting back in the classroom, Smith was eyeing eligibility to play golf for the Aggies and was cleared by the NCAA to compete.

After 16 seasons in the NBA, Smith qualified for his first golf tournament last week. All team golfers must qualify for each tournament in practice, unless he has finished first or second in the tournament prior.

Smith qualified for this week’s Phoenix Invitational (hosted by Elon) by one stroke. The tournament is underway at the par-71, 6,687-yard Alamance Country Club in Burlington, N.C. and will be played on Monday and Tuesday.

In an absolutely baller move, Smith showed up on Monday in a Bentley.

Prior to taking the first tee, Smith was dialed in.

Pulling up to the range at my first college tournament! pic.twitter.com/RDNJGhiRaw

Smith played in the five-spot for N.C. A&T and did just about as well as he could. He had a bogey-birdie-double-birdie stretch on his first nine, but he took the turn at 2-over in his first collegiate golf tournament.

followed @TheRealJRSmith for the first five holes today in his first tournament as a member of the @NCATAGGIES Golf Team. Had a pair of birdies, a great chip and stuck his approach on No. 9 to within a foot from the pin. @WFMY @ncatsuaggies pic.twitter.com/s7q6rpk1pa

@TheRealJRJr1 teeing off on hole 12 in the first round of the Phoenix Invitational at Alamance Country Club.@RiggsBarstool pic.twitter.com/DGGaW08hQI

Unfortunately, Smith could not hold it together on the back nine. Three bogeys and a double saw him finish his first round at 10-over.

He looked like a man amongst boys on the course because, well, he is. The day was not over, however, and Smith returned to the course for his second 18 of a 36-hole day.

He was 80th out of 84 players after Round 1, but he's already back out on course for second half of 36-hole day and has started 1 under thru 4 holes. pic.twitter.com/VRLFYyhNQm

Smith started his second 18 with a birdie on his second hole and was 1-under until he bogeyed back-to-back holes on his sixth and seventh.

Obviously, anything over par is not what you’re looking for, certainly not 10-over after the first round. Regardless, Smith being on the course in a college golf tournament is pretty awesome.

Favorite part of JR Smith's college debut is that he looks damn good doing it. pic.twitter.com/WlCNZ8cCvk