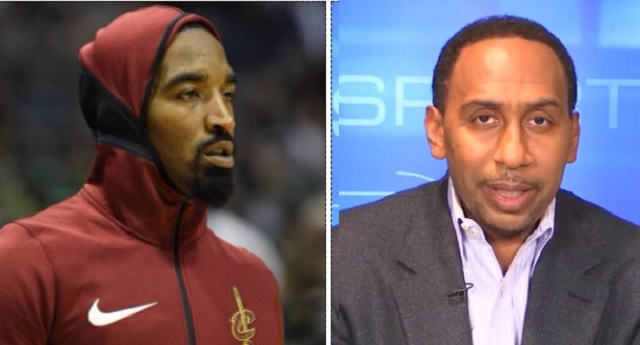 Things between Stephen A. Smith and J.R. Smith are starting to get real ugly.

Last week, the First Take Host randomly took shots at the Cavs star for wearing a hoodie on the sidelines.

And in Game 1 when they played against Boston, J.R. Smith was sitting on the bench in the fourth quarter with a hoodie on. I don’t know why the hell Nike made these damn uniforms that have hoods attached to it, by the way. You got a lot of those white folks in the audience that’s gonna think this is Trayvon Martin being revisited. And I’m not joking about it. The bench is no place for somebody to be wearing hoodies.

J.R. Smith fired back on Twitter with a series of tweets.

This man is always reaching. What does me wearing my Hoodie on the bench have anything todo with reminding “white people” of #trayvon

During today’s edition of ‘First Take’ Stephen A. Smith tried to backtrack his remarks by claiming that he only had a problem with J.R. Smith wearing the hoodie on the bench but then went on to mock the Cavs guard by saying that J.R. might need a hoodie to hide after performing terribly on the court in the Cavs last three games.

This of course pissed of J.R who took to Twitter once again to clap back at the ESPN host.

Don’t get mad at me cause y’all show trash! Ratings are down it’s no secret! Everyone knows! The best part about it is you take time out

Your day to prepare for what your going to say about me. It’s so flattering I’m so appreciative for giving me my own time thank you! 🤣🤣🤣🤣

Didn’t he have his own show before am what happen? Now he gone get kicked off this one too? Guess it’s back to the #DrawingBoard

Him an max trying to bring the show back after skip left! 🤣🤣🤣🤣🤣 https://t.co/U6U8KctrgE