It’s Only January, But This Might Be The Bat Flip Of The Year 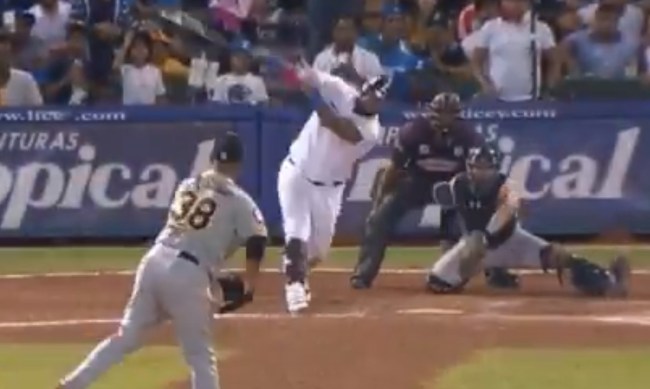 We still have to wait 25 more days until Spring Training starts, but this ridiculous bat flip that is really something. In a bat flip so spicy it will warm your insides no matter where you are in the mostly frozen country. A former MLB player pulled off an outlandish bat flip that you will be immitating for years to come or will absolutely loathe. There is no middle ground on this one. Juan Francisco, who hasn’t played in the big leagues since 2014, launched a behemoth bomb down in the Dominican Winter League and he made sure everyone took notice.

Francisco, who played for the Reds, Braves, and Blue Jays, is currently tops in the Dominican Winter League with eight home runs in 35 games. On Thursday night, the third baseman belted a majestic grand slam for Tigres del Licey. It was so epic that Francisco couldn’t help but to stand in amazement of his own Herculean blast. He then proceeded to bat flip his baseball bat into the stratosphere.

He almost flipped his bat out of the stadium. The spectacular slam helped power Francisco’s club to a 6-2 win over Aguilas Cibaenas. Speaking of bat flips, check out the 50 greatest bat flips of all-time over at MLBdotcom.