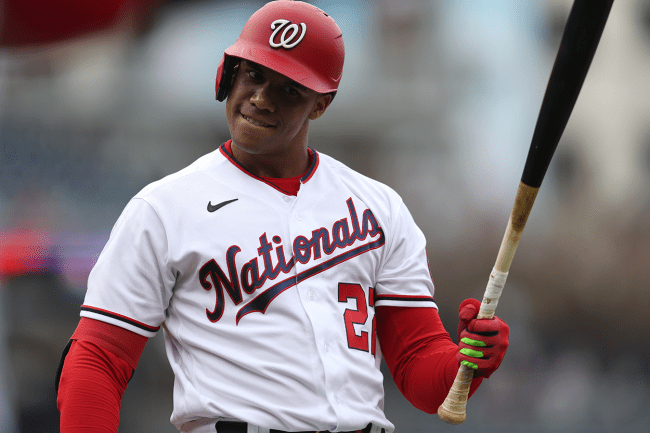 Juan Soto is part of the new generation of MLB players that are playing loud and having fun. As baseball desperately tries to build its younger fanbase, the 23-year-old superstar is exactly what the sport needs and his cleats are the perfect example.

Ever since Soto entered the league, he has been masterful. He never hit below .280 in any of his first four seasons, averaged 24.5 home runs per year and added a lot of RBIs in the process.

While his bat is one thing, Soto’s demeanor is another. He plays with a lot of swagger and his signature shuffle is what he is most known for outside of his ability to hit.

Whenever Soto takes a pitch during his at-bat, he gets low in his stance and does a funky little slid around the box. Sometimes he looks at the pitcher to try and get in their head, sometimes he messes around with his junk, and sometimes he looks back at the umpire in disbelief.

Soto once detailed the ‘Soto Shuffle,’ as it has become known, and explained the origin.

“One day they throw me a pitch down in the dirt and I just jump,” Soto said on MLB Network’s Intentional Talk in 2020. “How happy I was because it was a nasty curveball.”

When he first did the happy dance, his teammates and opponents were both confused with the reaction. Soto explained that he was not trying to show anyone up, but was simply proud of his improvement and patience at the dish.

“They were like, ‘What you doing kid?'” he said. “I was like, ‘I’m just happy to take these pitches, he’s throwing one hundred up there. What do you mean?'”

In that moment, the ‘Soto Shuffle’ was born, and now it has become a part of not just his game, but who he is. The Nationals outfielder debuted cleats for 2022 that feature his own signature shuffle on the back.

He even had the silhouette on the back of his shoe during Washington’s cherry blossom game, which took the already awesome uniforms to the next level.

Juan Soto having Juan Soto doing the Juan Soto Shuffle on the back of his cleats is so awesome pic.twitter.com/RrChfoQmcU

There are very few players as fun to watch as Soto and he always takes his swagger to the max, even with the little details like his cleats.