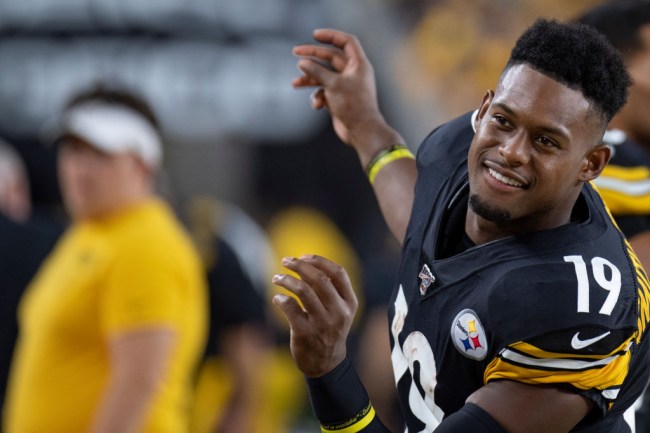 JuJu Smith-Schuster loves him some video games and is pretty well-known in the Twitch community. He even joined Ninja and Drake on a Fornite stream that basically broke the platform thanks to so many viewers tuning in.

Since Week 4, the NFL has teamed up with Amazon and Twitch to live stream Thursday Night Football games where some of the platform’s most well-known personalities will essentially hang out with viewers and watch the game with them.

Back in Week 14, Smith-Schuster joined up with TimTheTatMan and watched the Bears – Cowboys matchup. Fast-forward a few days when Smith-Schuster was back on Twitch streaming and he let the world know just how much money he made for teaming up with the NFL and TimTheTatMan; he secured a bag of $100,000.

THump, the streamer he was online with when he talked about earning the money, was simply curious about any endorsement deals the wide receiver had on the platform before Smith-Schuster decided to drop that subtle information about earning $100k.

“I did a stream yesterday, with TimTheTatMan, or like two days ago, we watched the Cowboys game and I got paid 100k for that,” Smith-Schuster said on Twitch.

“Oh, I don’t know if you’re supposed to say that but it’s all good, all good,” THump said.

Smith-Schuster has been sidelined with an injury the last three week, but it’s pretty clear he’s picked up a pretty lucrative side hustle while taking it easy at home.

I don’t it’s technically against Twitch’s code of conduct to talk about earnings, but it sounds like it’s frowned upon at least according to Thump’s response. Nevertheless, this man just made $100,000 to watch a football game.