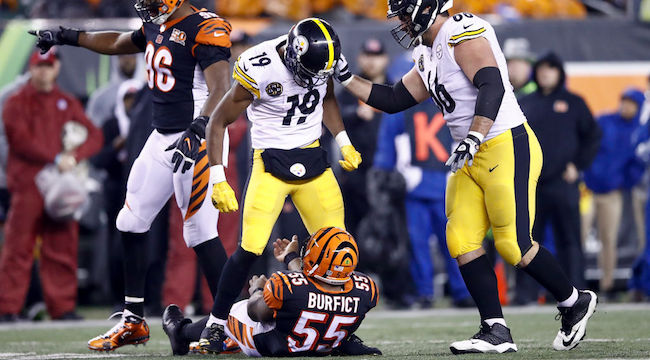 JuJu Smith-Schuster might currently be the youngest player in the NFL, but the rookie has quickly become one of the most entertaining people in the league since the season kicked off. He locked up a stationary bike on the sidelines after his actual one was stolen and has consistently pulled out some of the best touchdown celebrations that I’ve seen this season. He also rejected a thirsty Mia Khalifa on Twitter, which was quite a move in the age of every athlete sliding into women’s DMs.

During the Pittsburgh Steelers game against the Cincinnati Bengals in Week 12, Smith-Schuster showed the famously dirty Vontaze Burfict that karma is a bitch with a blindside hit and was rewarded with a one-game suspension for his actions— a sentence that teammate Mike Mitchell vehemently opposed. He spent the week joking about about his punishment on Twitter and it appears his sense of humor carried over to the game on Sunday based on a report by The Athletic’s Mark Kaboly.

JuJu Smith-Schuster said he took the helmet off during commercials, when he ate and when he used the bathroom

An unrepentant Smith-Schuster will return to the gridiron this Sunday for a highly-hyped game against the New England Patriot, and he said he will continue to make blocks like the one he leveled against Burfict:

“Oh, I am still playing physical. That’s going to be a part of my game. That’s who I have always been since I was a kid.

“I am still going to make those blocks, you know? Yes, I am going you be more careful; I’m going to aim for the shoulder and lower, just to be more protective of the game.”

I hope he continues to hit as well as he entertains.