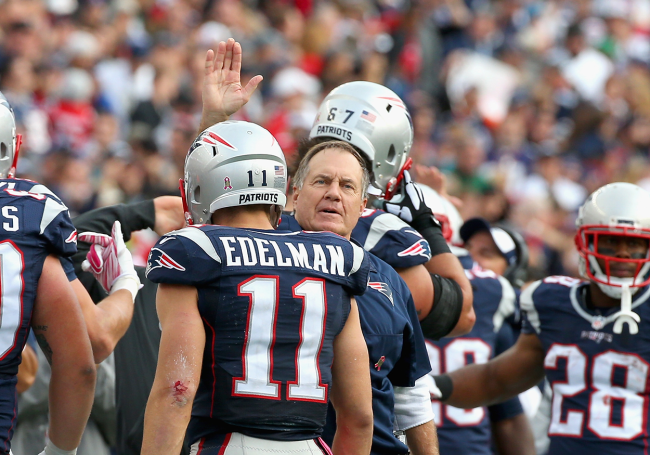 Julian Edelman has not played in the NFL since 2020. That means that he has not had Bill Belichick as his head coach for almost two years, but that doesn’t mean he isn’t still scared of his former boss.

Belichick, who is one of the longest-tenured coaches in the league, is known to be a no-nonsense kind of guy. He calls things how they are and he doesn’t mince his words, if he says any at all.

The direct, straight-forward nature of Belichick’s coaching style has served him well. He has six Super Bowls as a head coach and two as a defensive coordinator.

However, it has also brought him quite the reputation. Belichick’s demeanor is famous in amongst the players, media and fans alike.

Edelman is no exception. He does a phenomenal impression of his head coach and has brought it out on a few instances both during his career and in retirement.

Most recently, Edelman did his impression of Belichick in May.

It’s spot-on and absolutely hilarious. But Belichick would prefer that he doesn’t continue to mimic him on television.

During a recent appearance on the I Am Athlete podcast, Julian Edelman explained that he is still intimidated by Belichick.

The former New England wide receiver recently visited the Patriots, likely during OTAs or minicamp, and the head coach pulled him aside and gave him a talking to.

“He was like, ‘Look, if I have to turn on the f*cking TV and see you doing me every f*cking day, what are we f*cking doing?’ That’s what he would say to me. I’m still scared of the guy. He’s like the Emperor.”

Here is Edelman in his own words:

Julian Edelman on Bill Belichick: “I’m still scared of the guy.” This is gold!!!@Edelman11 @IAMATHLETEpod pic.twitter.com/NsmfOw8j33

It doesn’t sound like Belichick is someone to mess with. You never mess with the emperor.