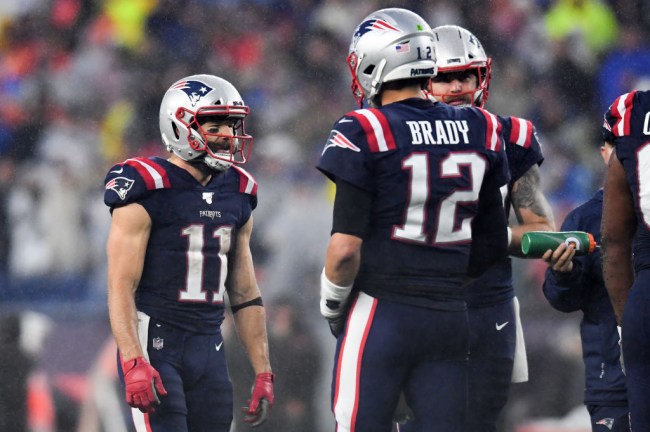 Julian Edelman has caught 36 touchdown passes from Tom Brady in his 129 games played with the Patriots. He’s been a favorite target of Brady’s over the years catching a total of 563 passes from the GOAT.

Nick Underhill of The Athletic asked Edelman to narrow his touchdown catches from Brady to just one favorite that stands out above the rest and the 33-year-old was pretty quick to point to his TD snag against the Seahawks in Superbowl XLIX.

“Mine was probably against Seattle when we were tied up together. We took the lead in fourth quarter. It was the first Super Bowl and it was nut-crunch time, nut-cutting time, so it’s good to go out there and something that we worked on so much, to go out and execute it with him and help him get his fourth (ring). That was something that is hugely cool.”

Such a man with words, that Edelman.

Calling crunch-time ‘nut-crunch’ time and ‘nut-cutting’ time is certainly one way to describe the moment, but I guess he’s not wrong. After all, it was the Super Bowl, every situation is ‘nut-crunch’ time really.

Edelman had a huge game against Seattle in that Super Bowl catching nine passes on 12 targets for 109 yards and that score he so eloquently recalled to our memory.

Brady and Edelman have hooked up in the passing game 92 times this season for 1,019 yards and six touchdowns.

We’re already used to it, but except for these two to continue to put up numbers together as long as Brady is still around in New England.