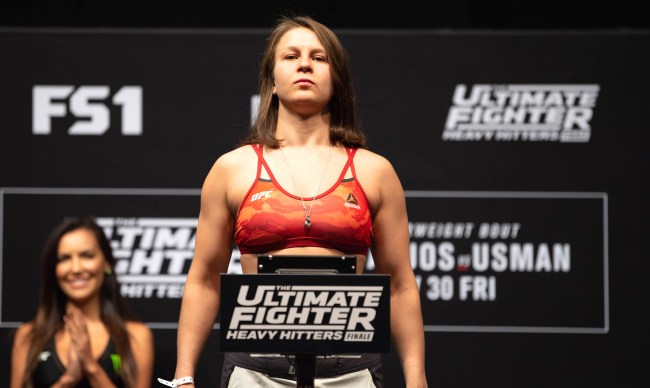 This past weekend was a good one for women’s MMA as not one, but two candidates for the 2020 Fight of the Year emerged.

We had Joanna Jedrzejczyk suffering a nasty looking lump on her forehead during her brutal five round UFC 248 war against UFC strawweight champion Zhang Weili.

While over in the Invicta Fight Championships, Julija Stoliarenko became the first Lithuanian to win a world title in MMA when she claimed the vacant Invicta FC bantamweight title after a savage five round battle that left the cage painted in her opponent Lisa Verzosa’s blood.

Stoliarenko, who appeared on The Ultimate Fighter: Heavy Hitters, showed exactly why she was chosen for the 28th edition of the show when she landed a vicious elbow to Verzosa’s head near the end of round three, opening up a massive cut.

Is this the bloodiest fight in Invicta? This is ridiculous #PhoenixSeries3 pic.twitter.com/pc0iO7nsRL

After the fight, MMA Fighting reports Stoliarenko told the media, “I’m so thankful to Invicta for giving me that opportunity. I know that I’m barely known for American public, but gosh, I wanted to be here so badly. I want to say one moment, in [this] arena there is a man who had a birthday yesterday and it’s my coach and that’s kind of a present for him.

“Two years ago I fought for a lethwei world title and he told me some inspirational words before the title [fight]. I was in Japan, he was in Lithuania and he messaged me, ‘I’m destined to be in martial arts and I should win the title for myself, for everybody who I love, for all my gym fighter house, and for him.”

Stoliarenko may have won the fight, and the title, but damn, look at her. Especially her arms. That is one tough woman.

Watch the entire instant classic below…