Five Takeaways From UFC 248: A Fight of the Year Candidate and a Dud 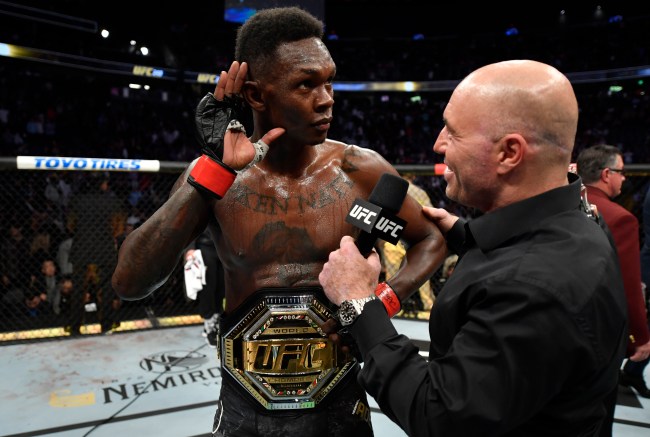 Interesting fight card, UFC 248 was. Interesting isn’t really a euphemism for anything, but it’s tough to adequately summarize an event that featured some impressive knockouts, technical submissions, and one of the greatest fights of all time.

It’s tough to adequately summarize because UFC 248 also featured one of the worst title fights in UFC history. It just so happened to be the Israel “Stylebender” Adesanya vs. Yoel “Soldier of God” Romero title fight that left an indelible stain on an event that was positioned to be Adesanya’s coming out party.

With Adesanya and Romero barely engaging throughout their 25 minute contest, the fight lacked action, it lacked pace, it lacked punches and kicks mostly, although Adesanya essentially won the fight by attacking Romero’s leg.

Lukewarm. Lackluster. Absurd. They all accurately describe the UFC 248 main event. It was the polar opposite of the evening’s penultimate bout. We’ll get into that more in a bit, but for now, here are the biggest takeaways from UFC 248.

Israel Adesanya laid out the strategy that helped him win at #UFC248. pic.twitter.com/cI2IZfIRmw

This type of performance (or lack of performance) is not the death knell for Adesanya’s career, but it’s not a great look for a fighter who many were calling the most exciting and creative fighter in the UFC. He certainly didn’t look the part at UFC 248.

Adesanya withstood the boos and taunts from the irate crowd, explaining his tactics, but now that the fight is over, he’ll need to go into damage control mode and repair his public image.

Looking back through UFC history, it would behoove Adesanya to remember Anderson Silva’s title fight against Demain Maia or Tyron Woodley’s second fight against Stephen Thompson. Both fights did significant harm to the reputations of both former champions, and while Silva was eventually able to restore his image, Woodley never quite removed the stain the fight left on his career.

Israel Adesanya still has the potential to be a global superstar and one of the UFC’s top international draws, but he’ll need to get back to the sensational striking that the world knows him for, and he’ll need to do it against Paulo Costa, who has already been pegged as the next challenger to Adesanya’s title.

As bad as the UFC 248 main event was, the co-main event between strawweight champion Zhang Weili and Joanna Jędrzejczyk was an instant classic, and an early candidate for the 2020 Fight of the Year.

Zhang Weili is starting to unload on Joanna #UFC248

While Zhang earned the split decision victory, the fight was razor thin. Both Zhang and Jędrzejczyk fought through tremendous adversity during their 25-minute contest, dishing out heavy punches and kicks, knees and elbows. They traded in close range and at distance for the entire bout, battering each other, causing significant damage.

Immediately after the fight, many MMA insiders called Zhang vs. Joanna the greatest women’s fight in UFC history. It’s not hyperbole. It was the best women’s MMA fight of all time. Period.

An absolutely exceptional fight Zhang vs. Joanna will go down as the highlight of UFC 248.

Yoel Romero has long since been considered one of the scariest fighters in the history of the UFC. He’s an absolute beast of superhuman proportions, capable of doing things that no one else is capable of. Unfortunately, he displayed none of those skills at UFC 248.

Not quite how we expected this #UFC248 main event to start… 😅 pic.twitter.com/Vg14uwBdKl

Competing in his fourth UFC middleweight title fight, Romero not only came up short against Israel Adesanya, and he not only dropped his third straight contest, but he also delivered one of the worst performances of his career, doing almost nothing for the majority of the 25.

Romero will likely go down as one of the greatest fighters to never wear UFC gold, and at this point it’s difficult to imagine a scenario where he’ll ever fight for the title again.

The Chinese Champion Retains Her Title Through Coronavirus Epidemic

There is no question that UFC strawweight champion Zhang Weili had the most bizarre training camp for UFC 248.

Forced to flee from her home base in Beijing due to the Coronavirus outbreak, Zhang resumed her training camp in Thailand, followed by a stop in Abu Dhabi before arriving in Las Vegas. Zhang trained for her first title defense, and the biggest fight of her life, without many of her training partners, and without her MMA coach, yet she still managed to deliver the best performance of her career.

It’s tough to imagine the pressure Zhang carried on her shoulders during UFC 248. She used the platform to serve as an emblem for her strong and resilient nation. She offered a message of unity and perseverance, and she literally walked through the hell of Jędrzejczyk’s Muay Thai to successfully defend her title amid global hysteria. That’s the sort of thing that legends are made of, and for the second straight fight, Zhang Weili delivered a star-making performance.

The Sugar Show Sequel Might Just Be Better Than the Original

After two years away from the Octagon, “Sugar” Sean O’Malley was successful in his UFC return, needing a shade over two minutes to dispatch of Jose Quinonez with a head kick and punches.

Just 25, O’Malley was pegged as a future UFC superstar years ago when he delivered an incredible knockout on Dana White’s Contender Series, but injuries and drug suspension forced him out of action for 24 months. Many were worried that the time off could have negative effects on O’Malley’s career arc and build. Many were wrong.

The Suga Show wasn't canceled, it was just between seasons. Welcome back @SugaSeanMMA.

O’Malley looked exceptional at UFC 248, landing a handful of kicks before sealing the deal with hammer fists on the ground. O’Malley looked quick and smooth, avoiding and evading most of Quinonez’s attacks. O’Malley was nearly flawless.

Taking no damage in the fight, O’Malley is finally ready to build on the notoriety he first earned in 2017. And with his name cleared and restored, he’s now back on track to make a steady run through the bantamweight division.