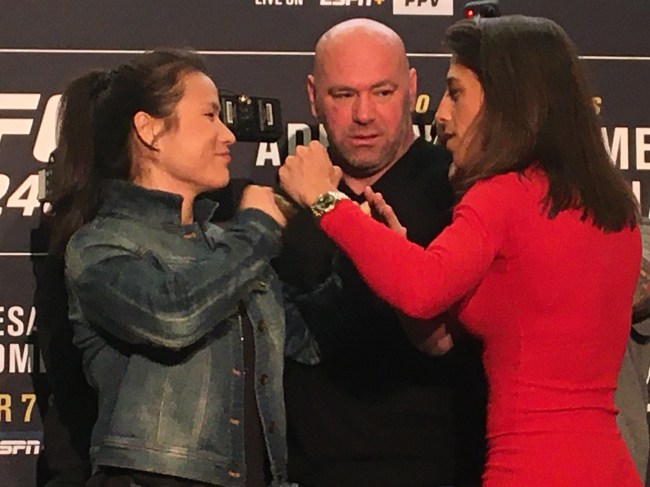 Fact: There is no other media source that is more in tune with Saturday’s UFC 248 fight card. It’s 100-percent because we’re the only outlet that can actually communicate with all the fighters on the card!

That’s right. Our Chinese connection with UFC champion Zhang Weili and main card fighter Li Jingliang led to a few interesting developments at the UFC 248 media day, the most intriguing of which centered on UFC 248 headliner Israel Adesanya, who was once known as Hei Long (Mandarin Chinese for black dragon) during his years in China.

Both Zhang and Li recall the years that Adesanya spent in the Wu Ling Feng organization. He was just as much of a phenom then as he is now. All the fighters in China knew the legend of Hei Long. He could fight the fight, walk the walk, and talk the talk. As Li explained “all fighters should try to be like him.”

With Chinese fighters like Zhang and Li essentially claiming Adesanya as an honorary Chinese, UFC 248 is shaping up to be a very Asia and Oceanic focused fight card, which should be very interesting when considering the importance of this fight card.

Will UFC 248 necessarily be the biggest seller in the U.S.? Probably not. Both headliners are new champs, one representing New Zealand and Nigeria, while the other is representing China. But the Chinese connection, amid the coronavirus scare, could actually lead to record numbers abroad. He believes that the Chinese government warnings surrounding coronavirus could lead to increased viewership on the PPTV, the digital home for UFC events in China.

With all Chinese being urged to stay indoors and avoid public spaces, Li believes that many Chinese will turn to the PPTV platform to watch the UFC 248 main card on Sunday morning, when it airs live in China.

He also found some solace in the situation. Recalling how he was forced to flee mainland China amid the coronavirus outbreak, Li explained that the weather in Thailand and New Zealand, where he finished his training camp, was actually better than Beijing.

It’s actually a really odd way to look at this global tragedy, but Zhang Weili agrees that there could be a correlation in the events and increased viewership. Ultimately, it was her title win in August 2019 that has led to an increased profile by the UFC in China, but UFC 248 could be the next major barometer for the UFC’s success in China and abroad.

Zhang was actually the real star of UFC 248 media day. Handling media duties, she eventually had her first staredown with Joanna Jedrzejczyk, and the results were exceptional.

Perhaps (most likely), it’s because English isn’t the native language for either Zhang or Joanna, but the staredown, trash talk, and intimidation tactics went all sorts of haywire. It’s likely that Zhang didn’t even understand Joanna’s head games, but she understood enough to clap back, trying to silence the challenger.

I can’t express how excited I am for this fight pic.twitter.com/bcNeoIcKbW

The staredown was easily the highlight of UFC 248 media day, and now it’s time to prepare for tomorrow’s early morning weigh ins, when 24 men and women will step on the scale to make weight for UFC 248.