The Most Unconventional Look at UFC 248: Adesanya vs. Romero You’ll Read All Week 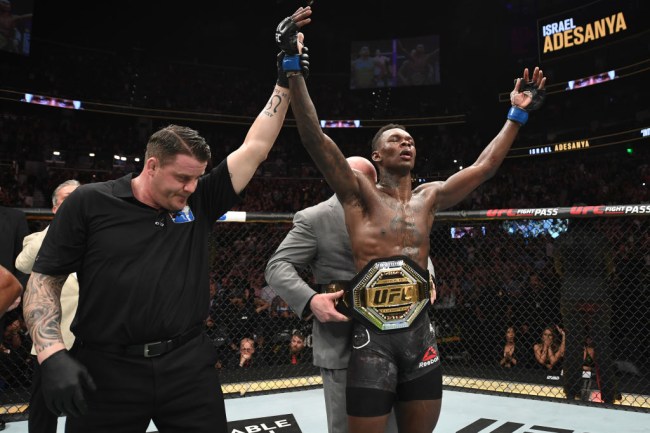 I can’t be fucked to make it to Vegas for the Wednesday open workouts at the MGM Grand (glad they brought those back, by the way), but come Thursday, it’s balls deep into the media bubble to track down the biggest stories of fight week.

What are the stories of UFC 248 anyway? The main event. There’re a couple of stories there. The co-main event, those stories are probably even juicier. Maybe it’s better to be more specific.

… will Israel “Stylebender” Adesanya bring some of his championship magic back to Las Vegas for his first title defense, after winning the middleweight belt last October? I take it he plans as such, but I’ll make sure to ask. Or at least I’ll wait through questions from like 17 other reporters and get off one lame question about how many picks he can fit in his hair.

Adesanya is really a true supernova. He’s barely been fighting in the Octagon for two full years and he’s already 7-0 in the UFC, with wins over Anderson Silva, Kelvin Gastelum, and Robert Whittaker in a single calendar year, one of which was the 2019 MMA Fight of the Year. Impressive stats.

“Stylebender” is right on the cusp of becoming the second biggest attraction in the UFC, just behind Conor McGregor, and while his coronation, in front of some 57,000-plus fans (a UFC record), was flawless, championship runs are often gauged by successful title defenses, save McGregor, who was on some other shit entirely in that respect.

There’s also challenger Yoel Romero, who’s fighting Adesanya for the belt at UFC 248. This is like the umpteenth title shot for Romero in the last three years, but he’s always scary and always dangerous, and he’s been in enough big five-round fights that a Pay Per View headliner is just another day in the Octagon.

On second thought, it might be best to avoid Romero for the rest of fight week …

We already had an encounter at a media event in LA on Monday, and I may not walk right ever again. In fact, I should urge Adesanya to fully consider what he’s signed up for by calling out Romero. People are never the same again after stepping into the Octagon against Romero, or in my case, across a table in a swanky L.A. garden restaurant full of reporters, entertainment lawyers and Hollywood agents.

Random Little Side Nugget: Crazy thing about Romero getting his fourth title shot is that this might actually be the first time that he competes for the undisputed belt, having previously missed weight at UFC 225, rendering him ineligible to win the title. There was another weight miss, at UFC 221, but that was for an interim belt, as was the loss at UFC 213.

Rarely seen behind the scenes footage.
Yoel Romero is so fast, you can’t even see him take me out via TKO (leg kicks).
As narrated by @YoelRomeroMMA @KarynBryant & @Abraham_kawa#UFC248 @BroBible pic.twitter.com/45MXCNex0V

Back to UFC 248, which goes down on March 7 on PPV (seriously? did I just make it to like the 480th word before mentioning the date of the event? What kind of news writing is this?), it’s a pretty cool card, all things considered. Just before the Adesanya vs. Romero main event, there’s another title fight, a strawweight bout, with China’s Zhang Weili defending her title against Poland’s Joanna Jędrzejczyk.

Already in Vegas for a few weeks, Zhang fled Beijing amid the coronavirus scare, outrunning COVID-19 from China, to Thailand, to Abu Dhabi, to the U.S., even conducting part of her training camp in quarantine. Like Adesanya, Zhang will also put her new title on the line for the first time, taking on longtime divisional queen Joanna Jędrzejczyk. It’s a rather tasty scrap from every angle.

There’s also a bad blood angle here. I might ask Zhang and Jędrzejczyk about their online feud, but it’s likely that 31 other reporters will ask the same shit over and over again, desperately hoping for something new and different, so I’ll probably just rip off some content in the media scrum without even asking anything.

Actually, that’s bullshit. I’ll definitely rap with Zhang Weili a bit in Mandarin. I’ll do the same with Li Jingliang, who fights Neil Magny on the UFC 248 PPV main card. Both of these guys are ranked, I think. Uhhhmmmm, yes … NO? I could’ve sworn both Li and Magny were somewhere at, like, numbers 14 and 15. I guess the welterweight division has changed a lot since Conor McGregor came back and decided to pursue a run at 170. (What? Geoff Neal is ranked number 10 and McGregor is 15? What is going on there?)

Regardless, Li vs. Magny is more of an insider’s, diehard fight, but it will be a fun one to watch. Maybe even one to bet on? Maybe throw it in a parlay? We’ll get into that more, later in the week, when I make some foolish bets that I’ll later regret at the sports book.

Well, maybe we can get more into that here, just for a quick second, hot minute type thing …

One fight I’m really looking at is a lightweight contest between Drakkar Klose from Detroit, by way of Arizona, and Beneil Dariush, from Iran, by way of L.A. With Klose listed as a +145 underdog, this is exactly the type of action I look for.

Klose is hungry to get big fights. Currently on a three fight win streak, a big finish at UFC 248, with a corresponding big callout or emphatic moment, could really position Klose to take a big step in his career, and enter an echelon where Dariush has been for years.

To be honest, as I’m writing this, I had to be reminded of how quietly good Dariush has been in the Octagon for more than six years. It was really just one bad year from 2017-2018, one bad stretch with a draw, bookended by a pair of knockouts, rather brutal knockouts, especially that Barboza flying knee.

Honestly, I just talked myself out of a bet. Rather, I’m waiting on it until I can talk to these guys at media day and see them at the weigh ins before deciding where to place my money. Glad I just figured out what I can talk to the fighters about at media day. Who gives a shit about their training camp? It was the best camp ever, by the way. Who gives a fuck about their weight cut? Actually … we definitely care about the weight cut.

I’ll repeat that because it’s important: WE DEFINITELY CARE ABOUT THE WEIGHT CUT.

The fact remains, with Yoel Romero in the main event, the Friday early morning weigh ins will be a big deal. Rest assured, I’ll be hungover as fuck, sipping some bitter, bitter decaf, nibbling on a light pastry at the ass crack of 9 a.m., watching ladies and gents stepping on to a state-approved scale in their Reebok-branded unmentionables, making digital content for Twitter, Instagram, and live stories. Shit like that.

It’s a strange ritual, but it’s one of those mandatory fight sports things. Comes with the territory, along with medical examinations, blood work, vitals, drug tests, and all other sorts of health checks the fighters are required to undergo during fight week. Romero will certainly be the most scrutinized this week in regards to his weight, so he has a lot riding on losing 14 pounds between now and Friday, March 6, 9-11 a.m.

Is that enough for now? I think so. Wait … no way. I can’t close without talking about the return of “Sugar” Sean O’Malley.

Away from the Octagon for two years, O’Malley was sidelined due to issues with USADA, the U.S. Anti-Doping Agency, which handles performance enhancing drug testing for the UFC. Honestly, I don’t know all the specifics of the O’Malley case, and I’m not going to pretend to, but, if memory serves me correctly, it was a similar issue as UFC light heavyweight champion Jon Jones, who had trace amounts of a banned substance (picograms, in fact) pulsing in his blood samples, long after the active period of the drug had worn off. It was probably mixed in with a tainted supplement defense. Don’t quote me on that. No malice or slander intended. And, all of this is way too much, honestly, so let’s focus on Sean O’Malley, the MMA fighter.

Sean O’Malley is an MMA whiz kid with all sorts of flashy moves, spinning kicks and back fists, flying knees and shit. His brief, and undefeated, body of work is overall rather exciting, and “Sugar,” (or is it “Sugar Show?” What does this guy call himself anyway?) has heaps of potential. He’s one of those stars in the making kind of guys, tons of cache, face tattoo, stylish threads, personalized weed strain, supplements his lost fighting income with live streams of Fortnite of whatever the fuck people play these days.

O’Malley is one to watch, and it’s always of curiosity when a highly touted fighter comes back from a long layoff. He claims to have new skills. He claims to be bigger and stronger. I want to see it at UFC 248. I want to see a huge comeback statement from Sean O’Malley at UFC 248. He’s booked in that final prelim spot, a rather coveted spot, as it’s considered the most viewed fight on the entire broadcast, which includes streaming, broadcast, and Pay Per View components (details below), so he has the perfect platform to make his mark.