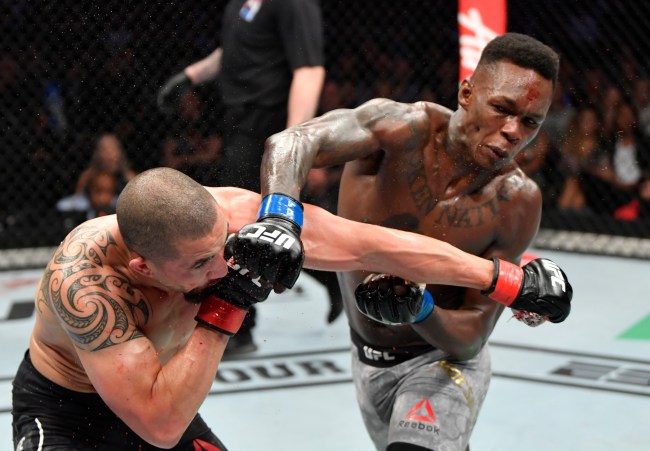 There’s probably no better time to jump in on the fight game than right now.

2020 is already shaping up to be an amazing year for combat sports. Between Conor McGregor’s return at UFC 246, the Jon Jones vs. Dominick Reyes fight at UFC 247, and Tyson Fury’s recent dominance over Deontay Wilder, there’s been no shortage of great fights this year. Not so surprisingly, there are way more big fights on the horizon, beginning with the upcoming UFC 248, which may ultimately go down as a major watershed moment for the UFC.

Looking ahead at the UFC 248 fight card, which goes down live on Saturday, March 7, at the T-Mobile Arena in Las Vegas, here are a few reasons why this is the perfect fight card for new UFC fans to sink their teeth into.

Because, if you start now, you may very well get hooked …

Israel Adesanya is on a Level Entirely His Own

There may be no other MMA fighter on the planet with as much steam, heat, and hype behind them as Israel Adesanya. In a little more than two years, the “Stylebender” has taken the UFC middleweight division by storm, rattling off seven straight victories en route to winning the title last October. Adesanya’s been nothing short of perfect ever since joining the UFC in 2018, and he’s already proven that his fights are indeed events that need to be tuned in for.

Easy comparisons would link Adesanya to a modern day Anderson Silva or a younger version of Jon Jones, but the “Stylebender” has forged a path all his own, delivering one exceptional performance after the next. Seriously, this guy is doing things inside the Octagon that no one before him has dared even try, and he’s making it look so easy.

Adesanya is a next level athlete, showman, and performer, and he’ll need all the tricks up his sleeve at UFC 248 against Romero, a fighter that basically no one wants to lock horns with. It just shows how wild Adesanya really is that he cherry picked Romero for this first title defense.

Imagine, that Yoel Romero possesses such superhuman strength and athleticism that he’s obliterated every man who has stepped in front of him inside the Octagon. Well, that’s a bit misleading considering that he’s coming off two losses. But both of those were highly controversial, and in another universe, with different MMA judges, Yoel Romero very well may be the UFC middleweight champion defending his belt against Adesanaya.

In this particular case, it’s pretty easy to overlook Romero’s current skid, given that both performances earned him fight of the night honors. And seriously, when considering tuning in for an Adesanya vs. Romero title fight, just remember that these two guys were a part of the two best MMA fights of 2019.

So yeah, it’s pretty simple. Israel Adesanya is must see TV, and his first title defense should no be missed.

Is Zhang Weili the Real Deal?

Last we saw of UFC strawweight champion Zhang Weili, she was making history in her native China, steamrolling through Jessica Andrade to become the UFC’s first Chinese born champion.

This fight truly has major potential to be a sea change moment, as a win over Jędrzejczyk would totally cement Zhang as the future of the strawweight division. Take it from me, one of the world’s leading authorities on Chinese MMA.

Sure, Zhang looked amazing in her last fight, blasting through her opponent with knees in the clinch and strikes, but Jędrzejczyk is a different kind of beast, much more patient in her approach.

This bout really has some major potential, as Zhang’s stand up style is completely converse to Jędrzejczyk’s. Can the champion keep the pressure and pace up for five full rounds? Can the challenger fight off her back foot for 25 minutes? Stylistically, it’s very likely that these two will end up in close range near the fence, where the dirty boxing and clinch game will play a major role in the outcome.

Oh, and to make this fight even more interesting, these two really don’t like each other. They’ve been going back and forth on social media for quite some time, and on March 7, they’ll finally get their chance to settle the heated score.

A new champ. An old champ. And some very bad blood. This fight has all the makings of a war.

All Hail the Return of “Sugar” Sean O’Malley

It’s been about two-and-a-half years since Sean O’Malley first burst onto the UFC scene with a viral finish on Dana White’s Contender Series, as narrated by Snoop Dogg. In the years since, he’s mostly sat on the sidelines, awaiting arbitration from USADA, the United States Anti Doping Agency, which tests fighters for performance enhancing substances.

Nearly two years, to the day, since O’Malley last stepped foot inside the Octagon, he’s finally been cleared for his return, and the whole combat sports world is eagerly anticipating “Sugar” 2.0.

O’Malley checks all the boxes for any emerging UFC star. First of all, he’s undefeated. That’s a pretty important one. Secondly, dude has mad style in the cage. He’s quicker than a puma and throws strikes out of nowhere. There’s a showmanship and artistry to his movements which instantly connected with the fanbase, not to mention his rather braggadocious nature.

Forced outside of the Octagon for two years, O’Malley has taken to social media and gaming to keep his profile high. And while he already recorded one of the UFC’s most viewed and viral finishes (nearly 4.4 million people have watched his DWCS fight on YouTube, not to mention millions more on various other social media), he’s remained relevant through digital platforms, expanding his following with the help of the Internet and Fortnite.

Anyway, UFC 248 represents O’Malley’s long awaited return to the Octagon, and considering that many believe that he’ll be a star for a long time, and eventually climb into title contention, it’s worth it to jump on this bandwagon right now, before people start accusing you of being a front runner.

So yeah, UFC 248 is the perfect time for any new or aspiring combat sports junkie to hop in on the Pay Per View game. It’s a passing of the torch type of fight card, with new stars, seasoned veterans, former Olympians, and no less than four undefeated fighters putting their records on the line. It’s also the prelude to the highly anticipated UFC 249 card, and no doubt there will be some sort of announcement on the PPV broadcast that fight fans want and need to hear.