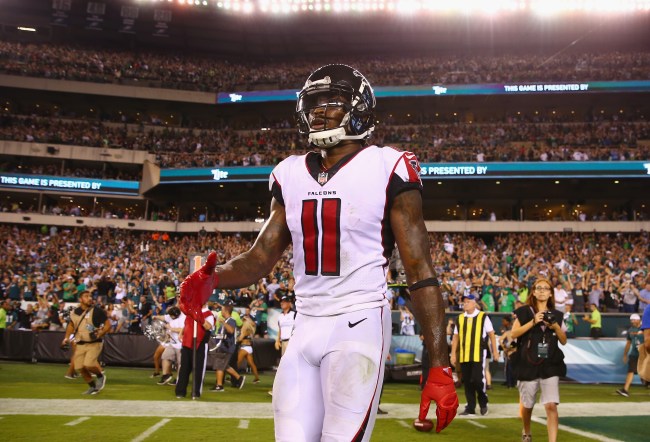 NFL teams finally released their schedule on Wednesday night which is usually a time to celebrate their players but the Atlanta Falcons made one glaring omission on their season schedule wallpaper.

After the NFL released the schedule for every team, the Falcons gave fans a graphic for them to download on their computers.

Considering Jones has been the subject of trade rumors for the past few months Falcons immediately freaked out.

Why TF Julio ain't in this wallpaper😤 https://t.co/gm3MBxyJ4E

No Julio?????? Y’all put a kicker, but not Julio fuckin Jones? Y’all Terrell, but not Juilo MOTHERFUCKIN Jones?? https://t.co/GxJfsAl58B

Julio must be getting traded soon https://t.co/VPCeSnsy5u

They really put in a picture of a field goal kicker instead of their franchise receiver lol https://t.co/WRpFjj5xwI

No Julio please end me https://t.co/QCljorEG1a

Y’all put your kicker on the wallpaper over your best wr 👀 bye bye Julio https://t.co/ExVDFiPlsQ

Just a few weeks ago Falcons GM Terry Fontenot told Fox 5 that he willing to take calls from teams for Jones.

“That’s one of those things when you’re doing things the right way in an organization, you have to listen if people call, on any player,” \“Especially, we are in a difficult cap situation, that’s just the circumstance and it’s not a surprise for us. We knew the circumstance we were in. Our administration has done an excellent job up to this point getting us in a position to be able to manage the cap, and yet we still have more work to do.”