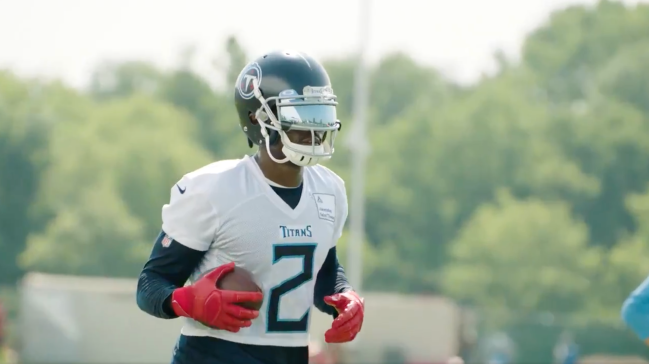 Waffle House is open 24 hours, seven days a week and so is Julio Jones. As a result, the 32-year-old receiver has had the nickname “Waffle House” since high school.

Ahead of his first NFL season with the Tennessee Titans, Jones played into his moniker with a fresh set of cleats. He showed up at training camp wearing an amazing set of kicks branded with the Waffle House logo and a football-themed menu.

Waffle House is the greatest breakfast restaurant in the world and this is a pro-Waffle House website. Any slander will not be tolerated.

Fortunately for him, when Jones was traded from Atlanta to Nashville, the Alabama native did not have to worry about missing out. The restaurant is primarily located in the southeast and there are 20 locations within a 30-minute radius of Music City.

The team even made him a hype video surrounding his nickname upon arrival.

So far during his 11-year NFL career, Jones has lived up to his nickname. He is one of the best wide receivers of his generation and is set to be a first-ballot Hall of Famer.

The veteran joins a wide receiving core in Tennessee that was led by A.J. Brown in 2020. It’s set to explode.

Health and age are a slight concern for Jones, but he will be an immediate factor in an offense that reached the AFC Championship in 2019 and the AFC Divisional round last season. He’s always open.