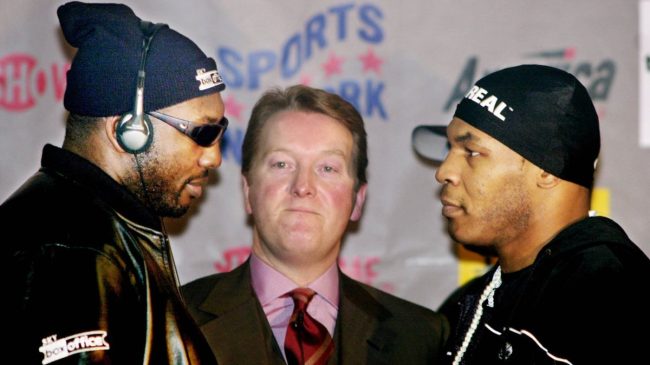 This contestant is probably rethinking his choice to square up to an ex-heavyweight champion, but you know the saying. Play stupid games, win stupid prizes.

Former boxer Julius Francis is going viral after a video clip of him knocking out an unruly guest at Wembley Park surfaced on social media. Francis, who now works a security job, gave this troublemaker a quick right hook which resulted in an afternoon nap.

Let’s rewind a bit to give some background on the situation.

Randle was once a British heavyweight champion in the ring. He squared off against the likes of Mike Tyson and Vitali Klitschko. He competed in MMA after his retirement from boxing.

Basically, he’s someone you probably don’t want to mess with.

But that’s just what this attendee did at Wembley Park. Reports state that the guest was arguing with others, and his attitude apparently followed him out the door as he was escorted from the venue.

Rather than leave peacefully, he’s seen pushing security guards while shouting obscenities. He then walks towards Francis and aggressively raises his hands, a move he probably regrets.

A quick jab cut the lights out and sent him tumbling to the ground.

Francis’s boss came out in support, saying that there was no wrongdoing. The boxer took the proper steps to remove the attendee from the venue and didn’t strike until he felt threatened.

BOXPARK founder/CEO Roger Wade has put out a statement on the Julius Francis incident: "I stand with Julius." pic.twitter.com/mXgzvGsmmG

He calls Francis “one of the nicest people” he’s ever met. Here’s the full response from his LinkedIn page.

“My understanding is that Julius and our security team spent 15 minutes stopping this man and his friends from abusing, spitting, and hitting our customers and staff. They carefully escorted him from the premises under constant provocation and violence. Finally, the person approached Julius in a confrontational manner, and he defended himself.”

I think most would agree.