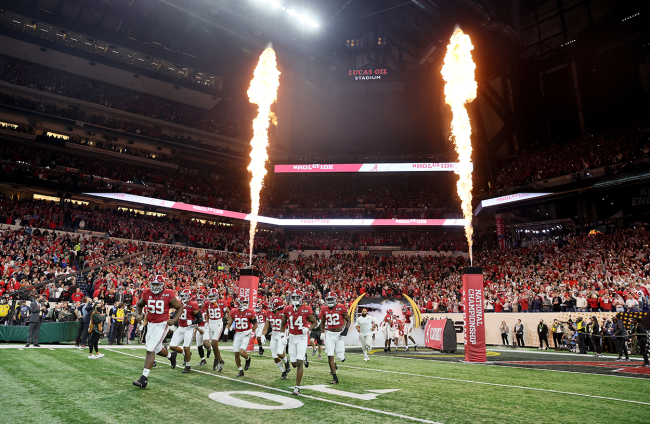 Four-star running back recruit Justice Haynes is the No. 3 player at his position in the Class of 2023 and the No. 37 recruit overall. The Georgia-native visited Alabama over the weekend and his arms are absolutely terrifying in photos from his visit.

Haynes stands 5-foot-10, 193 pounds and he is jacked. The amount of veins and muscles that pop from his arms when he is flexing is absolutely wild.

Haynes, who plays for Blessed Trinity Catholic High School, has until December to make a decision if he wants to be a part of the Early Signing Class. If not, he could sign his Letter Of Intent on February 1, 2023.

As things currently stand, his recruitment is wide open, but he is considered a heavy Georgia lean. The Bulldogs are likely to land the in-state prospect.

With that being said, there is a lot of time for things to change. Of the other schools who are in the mix, Clemson, Notre Dame, Alabama and Ohio State are considered to round out Haynes’ top-five.

Haynes has more than 20 D-I offers in total and his stock continues to rise. He will take a lot of visits over the next few months to try and narrow down his decision, and that stretch of travel began on Saturday with Alabama.

Wherever Haynes ends up, that school will get a very strong, athletic, dynamic back to add to its room.