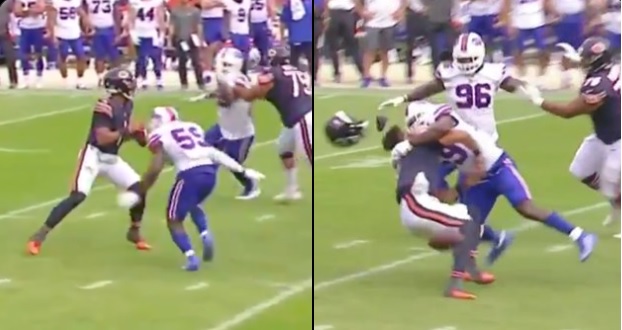 Fans were quick to remind Justin Fields of his comments from last week after he took a big hit during Saturday’s preseason game against the Bills.

After the Bears’ first preseason game, Fields told the media he felt the speed of the game “was kind of slow” following his impressive NFL debut.

Justin Fields asked about the speed of the game: “It was actually kind of slow to be honest. … Me going against (the Bears’ defense) every day slows it down for me.” pic.twitter.com/VFiAJ6WwOy

On Saturday afternoon, Fields played in his second NFL game and got welcomed to the league by Bills’ LB Andre Smith who delivered a vicious helmet-to-helmet hit on the rookie QB.

Fans immediately mocked Fields after he got clobbered by Smith.

After the Bears’ game against the Bills Fields clarified his game is “slow” comments.

Chicago #Bears QB Justin Fields wanted to clarify the “game is too slow” comment last week saying he meant it as it was slower facing a preseason defense with starters out because he goes against the Bears 1’s in practice. Says he wasn’t trying to come off as cocky.