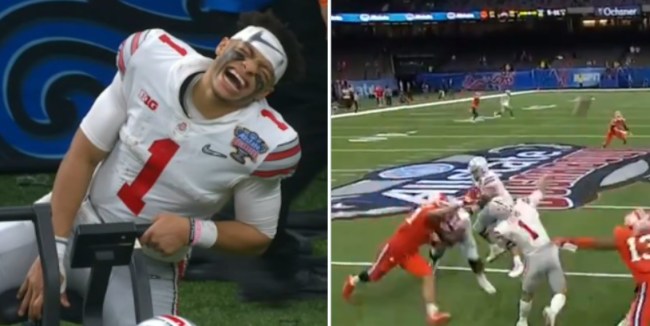 Before halftime of the Clemson-Ohio State, Fields took a vicious hit from Clemson linebacker James Skalski, who was ejected for targeting on the play.

James Skalski was called for targeting and ejected after this hit on Justin Fields. pic.twitter.com/0oqTQCTEDi

Justin Fields was just in a car crash pic.twitter.com/K9m7bQf6na

After the hit Fields immediately threw two touchdowns to extend Ohio State’s lead over Clemson despite the fact that he was clearly in pain.

Later in the game, Fields was seen having trouble sitting on an exercise bike to stay loose by ESPN’s cameras.

Even though he was clearly struggling after the hit, Fields was still able to connect on some big plays against Clemson’s defense.

Justin Fields can easily throw long bombs for touchdowns, but he can't easily get on the exercise bike on the sideline.

Just an incredible display of toughness and resilience by Fields.