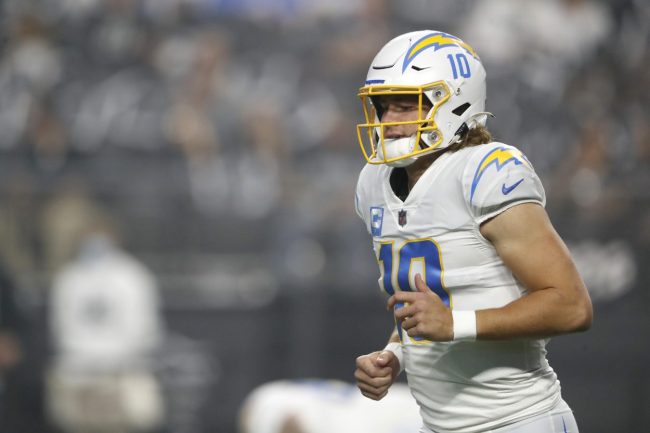 Justin Herbert’s offseason began with a Week 18 loss to the Raiders. Since then, it appears as though he has found a new way to take out his frustration.

Now that the season is over, Herbert is focused on getting right and dominating his opponents. Although it would appear that his opponents don’t have to be on the gridiron.

Herbert was recently spotted playing pickup hoops at the gym. However, his opponents appear to be significantly overmatched in terms of size and athleticism.

It could be because Herbert is 6-foot-6, 236 pounds, but it looks like Herbert was playing against high schoolers. Maybe even middle schoolers.

In a video that has recently gone viral, Herbert can be seen with the ball at the top of the arc, telling his teammates to clear out of the lane. From there, the 23-year-old quarterback of the Los Angeles Chargers drives to his right, pushes through the defense and throws down a hammer.

Herbert played basketball in high school before committing full-time to the game that has brought him a lot of success. Although the Chargers probably don’t love seeing their franchise quarterback go all-out in a pickup basketball game, you can’t knock his competitive spirit.

Waving off a potential screen, clearing out the lane and jamming home a tomahawk is absolutely vicious. Especially considering the fact that these dudes just pulled up to the local gym trying to run fives and all of a sudden had Herbert dunking on their head top.