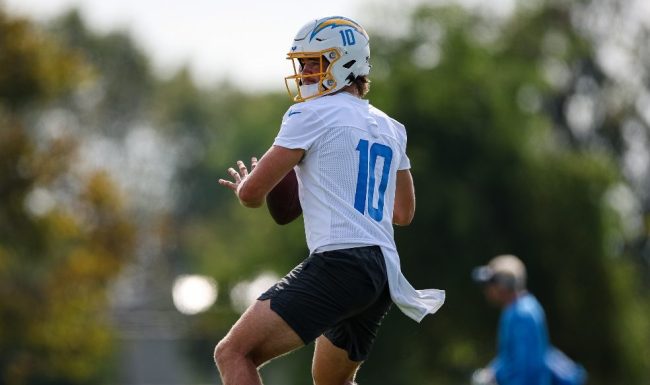 The Los Angeles Chargers are in the full swing of training camp as they aim to be a legitimate playoff contender. With just two years of experience under his belt, Justin Herbert has taken the football world by storm. All eyes are on him as he’s the unquestioned leader of this franchise. However, Chargers head coach Brandon Staley had some comments regarding his quarterback that should strike fear into everyone’s hearts.

Herbert has been lights out since taking over as the starting quarterback in Los Angeles. His game is nearly flawless. However, he’s entering just the third year of his career. With that in mind, Brandon Staley breaks down what he’s seeing from Justin Herbert and the offense in the Chargers training camp, per Sports Illustrated.

“A much more confident unit than it was a year ago,” Staley said. “They have very good operation and chemistry. It starts up front, the confidence that that group has playing together.”

If that’s the case, then the Chargers are going to be extremely difficult to stop. Staley continues by stating, “I think we’re able to call a much larger menu of plays for these guys. Justin [Herbert] has improved so much, too. They’re a tough cover.”

So, the young superstar quarterback is even more comfortable with the system and has improved his game a ton as well. Considering his age, Justin Herbert likely hasn’t come close to hitting his prime yet, which is insane.

Look for the Chargers to have one of the best offensive attacks in the NFL this year. Justin Herbert has a real chance to play as the best quarterback in the 2022 season. If that’s the case, then watch out for LA this year.