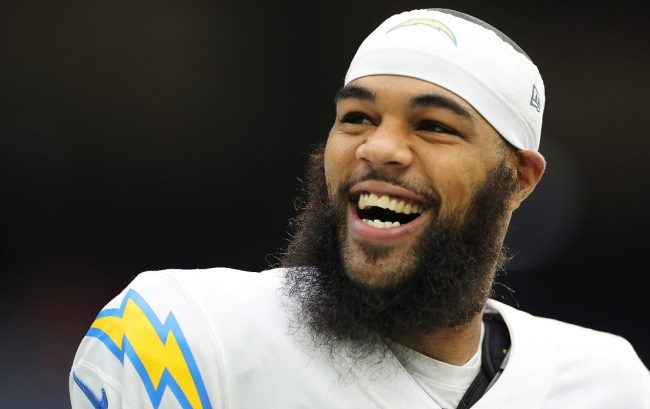 The NFL season is ramping up as teams across the league are in the middle of training camp. It should be a great year of football after an extremely busy offseason. The Denver Broncos made a huge trade with the Seattle Seahawks and now have Russell Wilson leading the way. Even so, he’s caught some flack for his boring catchphrase. LA Chargers receiver Keenan Allen couldn’t help but poke some fun.

Sosa Kremenjas shared a video of the Chargers receiver having a little fun in training camp. Wilson’s “Broncos Country, let’s ride,” has become a meme within the sports world. Keenan Allen just couldn’t help himself while warming up for practice on Monday.

It’s all fun and games until the regular season starts. The Chargers and Broncos are bitter rivals as they compete against each other in the AFC North. For that reason, Denver fans have had mixed reactions regarding the catchphrase Wilson so easily adopted. Regardless, they had no problem sticking up for their star quarterback.

Chargers receiver Keenan Allen decided to point his comedic finger in the direction of Russell Wilson. It’s only jokes for now but come game time, things will be a little different I’m sure of it. Don’t you think #BroncosCountry ? 😂 https://t.co/a3QSreIIZs

@DangeRussWilson gonna light em up and @PatSurtainll gonna lock him down.

It’s an amusing little jibe coming from the only AFC West rival that never swept the Broncos during their 6 years in QB hell.

Also the only AFCW rival that the Broncos swept during that time (2019 season).

Until the Chargers actually win something, they’re just little brother.

As you can see, Broncos fans are ready for the upcoming season. It should be an interesting year, especially considering how loaded the AFC West is right now. Regardless, Russell Wilson is likely to hear his “let’s ride” mantra all year long.