Justin Herbert Says That If It Were Up To Him, Chargers Punter Ty Long Would Be Out Of A Job 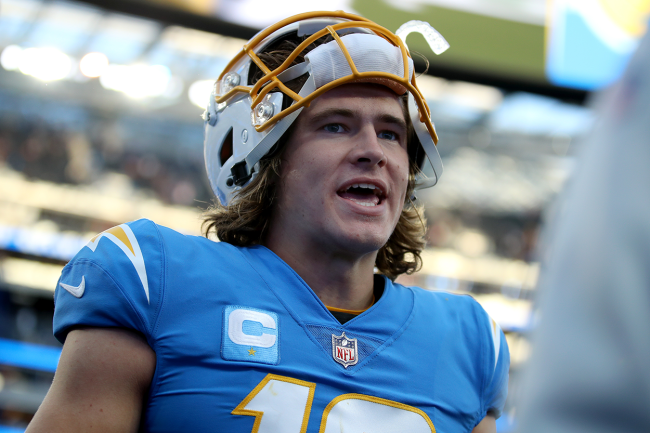 If it was up to Justin Herbert, Chargers punter Ty Long would not have a job. The 23-year-old quarterback has no desire to punt, ever.

Herbert, who was drafted with the sixth overall pick in 2020, has been very impressive in his first two seasons. He has completed more than 65% of his passes in both years for a total of 9,350 yards and 69 touchdowns with 25 interceptions. He also added 536 total yards on the ground with eight touchdowns on 118 attempts.

All of that is great, but big numbers don’t necessarily lead to wins. Fourth down conversions, on the other hand, typically have a direct correlation.

Against the Raiders in the final game of the regular season, the Chargers went for six fourth downs. Herbert went 6-for-6 for 106 yards and a touchdown.

JUSTIN HERBERT IS A FOURTH DOWN GOD. #BOLTUP

If it was up to Herbert, that would always be the case. He said on PFT Live that even though he could never convince head coach Brandon Staley to be that aggressive, he never wants to punt.

“Selfishly, as the quarterback, I want to be on the field for every fourth down,” Herbert said. “Whether that’s smart or not, that’s not my call to make. Whether it’s fourth and short, fourth and long, I really believe in the guys we have, and I believe if we don’t get it our defense can come up with the stop. So having the opportunity to go for it and change the game if you do get those, I think that’s big for our team because of how aggressive we are.”

Analytics have become far more important in the NFL in recent years. As a result, teams have been far more aggressive on fourth down.

Although Staley was the most aggressive coach in the league last season, Herbert would stay out there even more often.