Justin Thomas Finally Gets Major Number 2, As A Lackluster PGA Championship Turns Into A Thrill Ride 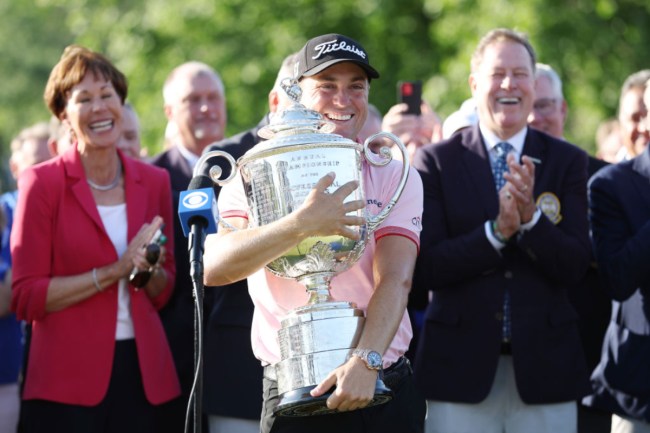 Justin Thomas woke up on Sunday morning seven shots back of leader Mito Pereira at the 2022 PGA Championship. He’ll go to sleep on Sunday night, or likely in the early hours of Monday morning, a two-time major winner after pulling off the third-largest comeback in major championship history. Thomas got the job done after firing a final round 67 and beating Will Zalatoris in a three-hole aggregate playoff with birdies on two of the three extra holes.

‘Finally’ was the word that immediately came to my mind, and probably Thomas’ too, when he tapped in for par on the third playoff hole to secure the second major, and second PGA Championship, of his career.

"It's just in time again at the PGA Championship."
Justin Thomas wins The Wanamaker Trophy for the second time! pic.twitter.com/2gTDXm7kRB

After hoisting the Wanamaker Trophy for the first time in 2017, a year in which he won five times, it was just an assumed expectation that Thomas would go on to rattle off a few more major wins between now and then. Golf, especially golf played at the highest level on the planet, is a fickle game and it took him five years to check the box for major win No. 2.

The fashion in which Thomas earned his second major couldn’t have been more on brand, either, which made it that much more fun to watch unfold on Sunday afternoon.

Southern Hills, like most other major championship venues, required elite ball-striking, long fairway finders off the tee, and magic around the greens. It also required extreme patience with only a few holes allowing players to go full-attack mode, but Thomas couldn’t afford to be patient while beginning his final round seven shots off the lead.

Thomas has shown plenty of times throughout his career that he thrives in spots, and on courses, where being aggressively patient is what gets the job done.

Take his PGA Championship win in 2017 for example. He began the day two shots back at a Quail Hollow course that was playing difficult that week before winning by two shots at 8-under. The same thing could be said about his 2018 Honda Classic win at PGA National, one of the hardest courses on Tour. Thomas trailed to begin the day before beating Luke List in a playoff to win at 8-under.

You have to put Thomas’ 2021 Players win in that group as well as he began the final round three shots back on a TPC Sawgrass course that forces you to execute extremely high-pressure shots.

You can now use JT coming from behind to win the 2022 PGA Championship at 5-under as just another example of him thriving when needing to be aggressively patient.

You could absolutely make the argument that JT had some help on Sunday with Pereira making double bogey on the 72nd hole to even allow himself and Zalatoris to go into a playoff, but that’s golf, and it’s especially true for major championship golf.

Mito Pereira finds the water with his drive on the 18th. 👀 pic.twitter.com/TU9lYYbSfI

Thomas saw his final nine holes on Sunday as an opportunity, it didn’t matter that he trailed by multiple shots with the clock running out. He knew the difficulties that lay ahead for the players he was chasing, knew that he had to post a low number to have any semblance of a shot at winning, and his 3-under 33 on the back-nine was good enough to give him a chance.

In a weird way, it felt like it was Thomas’ tournament to lose as soon as Pereira’s tee shot on the 72nd hole found a water hazard. Pereira could have still made par on the hole to win outright or made bogey to join the playoff, but it never felt like a real possibility.

Pereira never being in that situation before had something to do with that feeling, but Thomas’ come from behind efforts, and resiliency in the past, contributed to that mindset of it being his to lose even more so.

In a tournament that looked like it would end with a lack of drama and excitement, the final two groups’ finishes on the 72nd hole provided all the entertainment any golf fan could hope for. Southern Hills felt more like a U.S. Open venue this week than a PGA Championship track.

With a lack of firepower on the leaderboard on a weekend where saving par served as a majority of the highlights, any tournament is going to struggle to create excitement in that spot.

Come Sunday afternoon, however, major championship golf delivered like it always does. The entire feel of the tournament went from lackluster to a rollercoaster as the 72nd hole, in particular, smacked the entire golf world in the mouth.

You add a playoff to the mix, and you have yourselves a major championship we’ll remember for years to come.