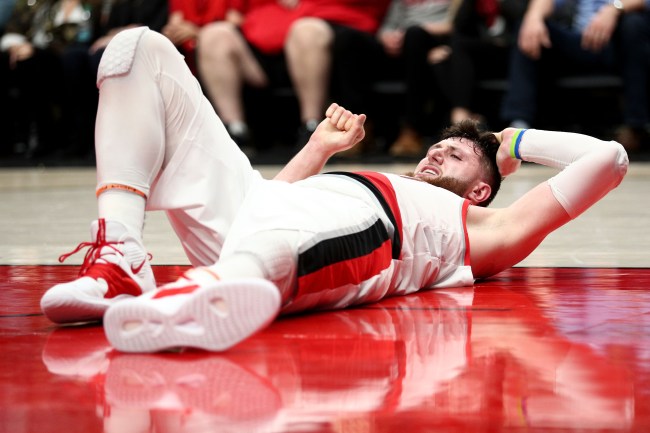 Jusuf Nurkic was having one of his best seasons in the NBA this year, helping the Portland Trail Blazers compete for a top-3 seed in the Western Conference and, realistically, have a chance to (maybe) take down the Golden State Warriors. Unfortunately, that all ended last night, because the big man went down with one of the nastiest leg injuries we’ve seen in the NBA for a couple years, with Nurkic snapping his lower leg in half similarly to how Gordon Heyward did back in 2017.

Out of respect to Jusuf Nurkic, I won’t be embedding the injury here for you guys to look at — which might lead to showing your lunch anyway — but, for those interested in seeing the gruesome video, here’s a link to it on Twitter from last night. Watch at your own risk, because it’s graphic. Just seeing the painful reaction of Nurkic, players and fans in the arena after it happened should tell you all you need to know about how bad things were.

Portland chanting for Jusuf Nurkić, who is down with serious leg injury 🙏 pic.twitter.com/C9up9iRBpT

It’s already been announced that the 24-year-old Nurkic will miss the remainder of this season, and, given the severity of his injury and the potential recovery time, there’s a good chance he’ll miss most, if not all, of next year, too. It’s a major blow for the rising star, who has to deal with the emotional side as much as the physical side of working his way back.

Following the news of Jusuf Nurkic’s injury, the NBA community came together and showed support for the seven-footer, with various players and media members sending love his way. Here’s some of what people were tweeting.

Hate this part of the game. Prayers up for Nurkic!

God please be with Nurkic🙏🏾🙏🏾

Prayers and support out to you Nurkic!! 🙏🏽🙏🏽

Never, never give up, my man Jusuf Nurkić…. I know it's hard … but you'll come back to play … I'll wait for you !!!! pic.twitter.com/uLIIODzNfX

Terry Stotts says Nurkic is at a local area hospital and doesn’t have much to say from there. Calls it “devastating” and described the locker room at “quiet.” Blazers clinched a playoff spot tonight by the way.

That last tweet from ESPN writer Royce Young really encapsulates the somber mood after Jusuf Nurkic went down, doesn’t it? The Blazers officially clinched a playoff spot with the win last night over the Brooklyn Nets, but any joy was taken out of the locker room after seeing what happened to the big man. What a deflating loss for the Blazers, but, more importantly, here’s to Nurkic bouncing back and recovering sooner rather than later.