Kadarius Toney Fires Back At Critics As He Misses More Games 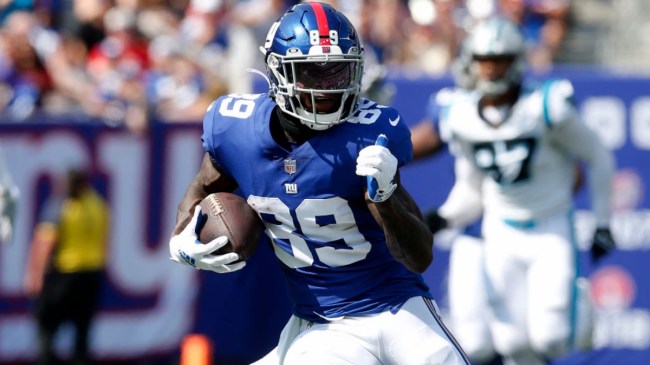 Entering the 2021 NFL Draft, a struggling New York Giants franchise had needs all over the place. Their offense line had been struggling. Their quarterback hadn’t impressed in his first 2 seasons. Their defense couldn’t stop the run. Their pass rush was lackluster.

After spending big on Kenny Golladay, wide receiver was not supposed to be among their more pressing needs. That didn’t stop them from spending a first round pick on Kadarius Toney.

Unfortunately, the pick hasn’t panned out. 6 games into the second season of his career, Toney has only played in one more game than he’s missed. Even in the 12 games he has played, he’s rarely impressed. This season, he’s gained 0 yards in 2 games.

Despite the issues, Toney doesn’t seem to believe the criticism of him is justified.

Kadarius Toney fires back at critics

Amid injuries, Giants’ Kadarius Toney cracks back at critics: ‘I’m going to be who I originally was’ https://t.co/nbD6246B6F

I mean, why would I doubt myself. I know what I can do and what I can’t do. Everybody lets one downfall or one mishap determine the outcome of how they feel. I really don’t care for that. I’m here to do one job. I’m here to play and be the best I can be. I’m not here for all that. Come on.

It definitely hasn’t been just one mishap. It’s been a steady stream of mishaps since Toney joined the Giants.

Toney also revealed that he is “not an information giver” when asked about when he might return.

When does Kadarius Toney think or hope he might return to game action?

“I’m not an information giver," he said. https://t.co/u8EcsP1fcg

Hopefully Toney is right to believe that the criticism isn’t justified as the Giants could really use some help at the position. The offense has been plagued by injuries and poor play at receiver and the team has won in spite of it. Imagine what they could be if Daniel Jones had receivers he could trust.