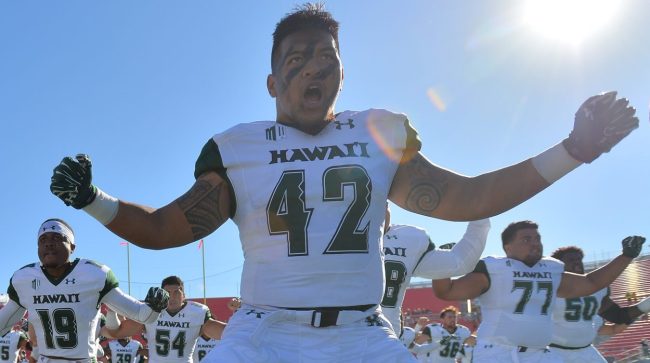 Kahuku High and Intermediate School is located on the northern corner of Hawaii’s island of Oahu and its varsity football just capped an undefeated regular season with a state championship. To celebrate, the Red Raiders performed one final ‘Haka,’ but one of the players cramped up mid-dance and it was hilarious.

Kahuku varsity football finished its regular season at 10-0. Not only that, but they beat their opponents by a combined score of 433-84.

The Red Raiders’ complete and utter dominance did not stop there. On Thursday, they played St. Louis in the 2021 First Hawaiian Bank/HHSAA Football State Championship game.

St. Louis, as you may know, is the alma mater of famous quarterbacks Timmy Chang, Marcus Mariota and Tua Tagovailoa. Kahuku beat the Crusaders 49-14.

After the game, as is customary, the Red Raiders performed the ‘Haka.’ The ‘Haka’ is a ceremonial dance in Māori culture. It is performed with vigorous movements and stomping of the feet with a rhythmic chant accompaniment.

In the case of Kahuku, their dance is uniquely their own.

Seamus Fitzgerald, a proud Māori man and Kahuku alumnus, does not appreciate when football teams across the United States perform various haka that is not intended for them. Prior to 2011, Kahuku was one of them.

In tern, Fitzgerald wrote and choreographed the “Kaipahua Kura.” It is a haka that is made specifically for his former high school’s football and rugby teams.

It translates in English to “we are the Red Raiders.” Now, 10 years later, Kahuku is believed to be the only football team in America with its own original haka.

In a goosebumps-inducing moment, the team performed its haka after winning the state title last week. It’s pretty awesome.

However, about midway through, one of the players had to bow out of the performance. 6-foot-4 offensive tackle Sione Heimuli got a cramp.

The big offensive lineman was mid-dance when he grabbed at his thigh and fell to the turf. He rolled out of the fram while his teammates around him stifled a laugh.

It’s really funny, but it doesn’t take away from the awesomeness of the Kaipahua Kura.

Like the champion that he is, Heimuli fought through the pain. A true warrior, he finished his performance in front of a sold-out crowd.