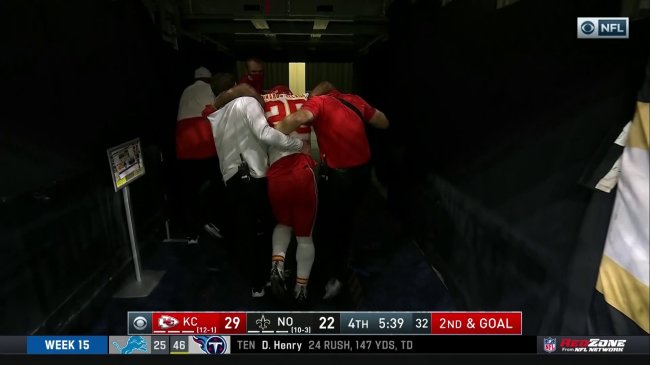 This does not look good for Clyde Edwards-Helaire. pic.twitter.com/q45Y8nf85q

The injury came as he was tackled near the goal line in the fourth quarter and had his left leg fold awkwardly underneath him. It was hard to tell in real-time when the injury occurred, but his body went one way and his legs went another.

Here's the play where Clyde Edwards-Helaire got injured.

Hard to tell exactly how it happened.pic.twitter.com/tekpAIoZmW

Kansas City is listing the ailment as a hip/leg injury, which makes sense when you look at the replay. As the Chiefs tried to run down the clock and get into the end zone to put the game out of reach, Edwards-Helaire took the handoff four yards and was wrapped up by multiple tackles. He stayed down on the field for a long time with what seemed like a potentially serious injury.

Clyde Edwards-Helaire seems to do a split here and has an injury to his left leg. Obviously view of injury is limited but I worry about a high grade left hamstring injury, which would end his regular season and possibly extend into the postseason #ChiefsKingdom pic.twitter.com/FyPEPEIAts

No. 25 was the first-round choice in 2020 for Kansas City and was having a strong year so far. He had 167 attempts for 724 yards entering the game and added 14 carries for 79 yards prior to his exit on Sunday. The 5-foot-7, 21-year-old is going to be a big part of the team’s offensive game plan for the foreseeable future and head coach Andy Reid will hope to have him back at full health for next season, if not by the playoffs this year.

In Edwards-Helaire’s presumed absence, Le’Veon Bell will take over as the primary option in the backfield. Darrel Williams and Darwin Thompson will also see increased playing time.