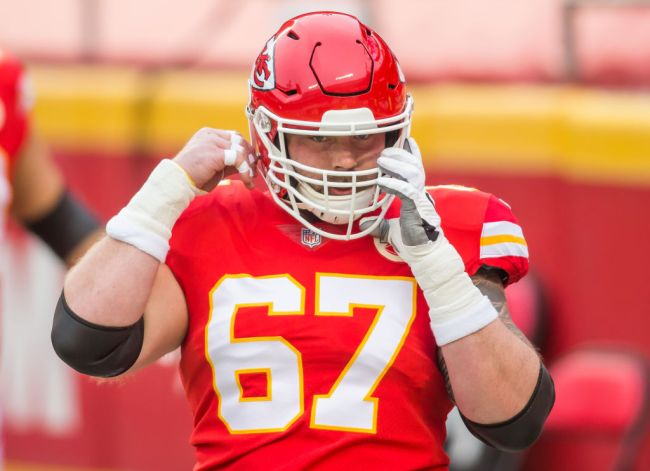 Half of a haircut might keep Kansas City’s backup center Daniel Kilgore from suiting up for the Super Bowl on Sunday.

The Chiefs’ offensive lineman and wide receiver Demarcus Robinson were both placed on the reserved/COVID-19 list on Monday, which would rule them out of the game if either were to show symptoms or test positive.

As NFL Insider Tom Pelissero reported on Tuesday, the whole situation could have been avoided if some of the team didn’t want to get trimmed up for the big game. Robinson and Kilgore were both placed on the list because they were in contact with the team barber who tested positive for the virus. Robinson received his haircut on Saturday, and Kilgore was the first of many Chiefs players who were set to get a haircut at the team facility on Sunday. Things were going as planned until the barber’s result came back midway through and created a problem.

“Sources say the barber tested negative five consecutive days before he was allowed to enter the Chiefs’ facility — including a Saturday PCR test that came back negative Sunday. The barber took an additional rapid test as a precaution before entering the facility Sunday, but the results were delayed briefly because of a line of friends and family also getting tested. He was wearing double PPE and was still cutting Kilgore’s hair — the first in a line of players waiting for haircuts — when the positive result came back. The barber was immediately removed; in a follow-up interview with NFL officials, the barber said he’d also cut Robinson’s hair the previous day away from the facility.”

On Wednesday, ESPN’s Adam Schefter elaborated on the story, including the fact that the barber was set to cut more than 20 players and coaches before he found out about the positive result. Patrick Mahomes was among those scheduled for a snip, but didn’t get that far.

There were over 20 Chiefs players and staffers, including QB Patrick Mahomes, scheduled Sunday to get a haircut with the barber who tested positive for COVID, per sources. The Chiefs acted wisely and aggressively, and pulled the barber – mid-cut – once his test results came in.

Kilgore, who was already halfway through the haircut when the barber received his result, had already been in contact with him. At that point, he was already set to hit the COVID-19 list, so he had the barber finish up before leaving the facility.

For those wondering: Being that Chiefs' C Daniel Kilgore already was sitting in the barber chair and deemed a "close contact", he told the barber to finish. And he did.

But this has the makings to become the first "Touch of Gray" endorsement to come out of Super Bowl week.

Even amidst all of the chaos, Kilgore was able to laugh through the incident and posted a rendering of what his haircut could have been if the barber hadn’t stuck around to finish.

Naturally, the internet also had some fun with the hairy situation…

Daniel Kilgore when they stopped the barber pic.twitter.com/tFD9iWMdTu

The barber leaving the chiefs hotel after making $200 for a 2 minute fade on daniel kilgore pic.twitter.com/rSbiS2Zmvq

Daniel Kilgore showing up to the super bowl pic.twitter.com/s6gox08zOy

A look at the scene where the person responsible for notifying the barber had COVID and Daniel Kilgore’s reaction. https://t.co/FZdRBTwssf pic.twitter.com/7dX56ZDubw

Daniel Kilgore getting ready for the SB like https://t.co/UB5SsrXMy9 pic.twitter.com/sGgAHBkXCE

Neither Robinson nor Kilgore have tested positive as of Wednesday night, and if that trend continues, they will get on a plane to Tampa Bay on Saturday.