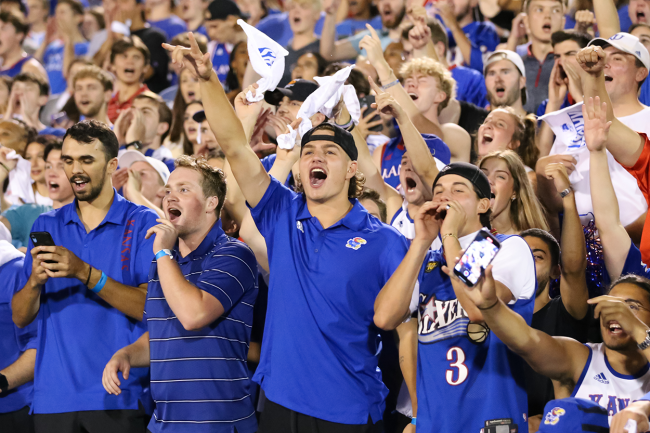 Entering the weekend, Kansas football had one win in 2021. It beat South Dakota by three points in the first week of the season and that was it.

However, after Saturday, the Jayhawks are 2-8 and their second win of the season came in tremendous fashion.

The University of Texas played host to what was expected to be its fifth win of the season, bringing them one step closer to bowl eligibility. That was not the case.

Kansas jumped out to an early 21-point lead and held off a late comeback to force overtime. And then the unthinkable happened.

The Longhorns scored first and kicked the extra point to go ahead by seven. After the Jayhawks answered, head coach Lance Leipold made the correct decision to go for two right out of the gates.

Former walk-on fullback/tight end Jared Casey slipped away from coverage and hauled in the game-winner. He had not played a snap for Kansas prior to Saturday night and immediately became a hero.

His parents’ reaction was incredible:

As was the reaction of this (seemingly singular) traveling fan throughout the game. Look at this entire thread for a real journey of emotions:

I’m witnessing a Kansas football fan experience joy for the first time. This was at 14-0. pic.twitter.com/6Ud6XmnbnN

Meanwhile, back in Lawrence, the bars were lit. Jayhawks fans have never experienced a win over the Longhorns on the road because, prior to Saturday, it had never happened.

Video from Bullwinkle’s bar — better known as The Bull — shows the entire place erupt as Casey made the game-winning catch. It’s electric.

My sister just sent me this from the Bull in lawrence. Makes me so happy because she missed this type of experience because of Covid and as a junior now gets this. Wow rock chalk pic.twitter.com/2U3WptAGuZ

After a year without fans, full-capacity dining, and gathering of friends, this video is wonderfully refreshing. Congratulations, Jayhawks fans. Sucks to suck, Longhorns fans.