Kareem Hunt’s Arrest Video Has Surfaced, And It Shows The RB Pleading With Cops From Back Of Cruiser 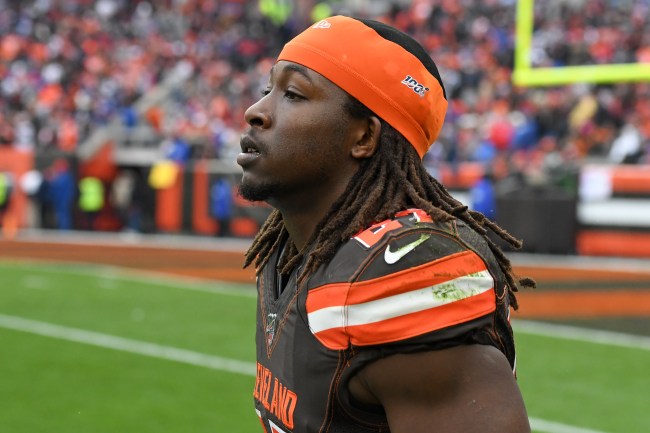 Kareem Hunt had a solid second half of the season for the Cleveland Browns, when the troubled running back returned from his 8-game suspension due to a serious domestic violence incident that occurred in March of 2019. While Hunt has all the talent in the world, the 24-year-old has to get his personal life in order, as he was just recently arrested and cited for a speeding ticket.

Although Kareem Hunt only received a citation for speeding, during the stop, police found a bag of weed in his car, as well as an open bottle of vodka. Now TMZ Sports has obtained the dash cam video from the arrest, which shows how much the embattled running back is pleading with the officer while trying to explain himself. Take a look below.

Sure, Hunt made a mistake here and deserved to be cited for the speeding ticket, but it’s heartbreaking to hear his plea to the officer. And, while the video above doesn’t pick up audio of Kareem’s conversation with the officer, the Browns player is visibly distraught and emotional.

Once the two return to the cruiser, the running back tries to defend himself even more, spilling details to the cop about some of the things he’s been dealing with. Here’s a short transcript, via TMZ Sports.

“I just — it stresses me out,” Hunt later added. “I lost everything already, sir. I’m just trying to be in my hometown and chill.”

The officer explained to Hunt that his car smelled like weed … and when he went back to search the car — he told Hunt he found pot in a backpack with Kareem’s name on it.

The cop also told Hunt he found an open container of vodka in the same book bag.

The two had a long conversation in the squad car … with the officer — who tells the NFL star he’s “one of the hugest” Browns fans — criticizing Kareem for putting himself in the situation.

“You had a good second part of the year,” the officer says. “You don’t want to screw that up over some weed.”

The two went back and forth over who the weed belonged to … but ultimately, Hunt admitted to the officer he’d fail an NFL drug test if one were administered to him at the time.

The officer scolded Kareem for “pissing” on his second chance in the NFL … and even brought up Ray Rice.

“Look at the Ravens running back — what happened to him? Rice. I mean, dude, I’m shocked that you got a second chance.”

Hunt was emotional during the entire talk … and at one point lamented not being able to play for his former Kansas City Chiefs team in the Super Bowl this weekend.

“It hurts my soul. You don’t even understand. I’ve been fighting a lot of sh*t lately. It still hurts me to this day.”

Ultimately, the cop seized the weed … but let Kareem off with just a speeding ticket and sent him on his way.

There’s no denying that Kareem Hunt made a mistake by speeding by the cop and having both weed and an open vodka bottle in his car, but it’s really sad to see the running back so lost at such a young age — especially given the fact he’s had a chance to revive his NFL career.

As a restricted free agent this offseason, and a new regime in Cleveland coming with no ties to him as a player, who knows what the future holds for Hunt. But here’s to hoping he gets the help he needs in order to get right, because it’d be a sad ending to see his NFL days over so soon.