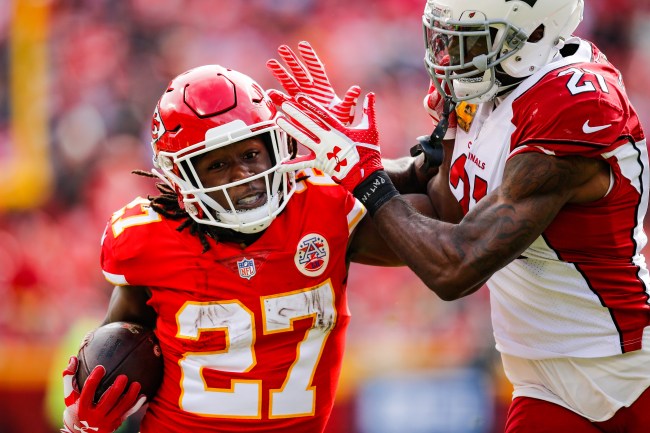 Kareem Hunt, who was released by the Kansas City Chiefs during the regular season following a disturbing video of an altercation with a woman in a Cleveland hotel, has been signed by the Cleveland Browns today, according to NFL Network’s Ian Rapoport.

The #Browns signed RB Kareem Hunt to a 1-year deal that could be worth more than $1M not factoring in the suspension, source said. More than the minimum. After this year, he’ll be an RFA.

As you can see above, Rapoport’s reporting that the Browns signed Hunt to a one-year deal that’s worth about $1 million when not factoring the NFL suspension he’ll be handed down. The embattled running back will be a restricted free agent in 2020.

John Dorsey, the Cleveland Browns general manager — who previously drafted Kareem Hunt in 2017 while holding the same position with the Kansas City Chiefs — released a statement about his decision to sign Hunt. Here’s what the team’s Twitter account posted following the breaking news.

Additionally, Kareem Hunt released a statement, first apologizing again for the disturbing incident and video, as well as admitting that he’s going to take the “necessary steps to learn and to be a better and healthier person from this situation.”

The Browns, who have a young backfield with quarterback Baker Mayfield and fellow rookie Nick Chubb at running back, just added another weapon on offense. That might be great for the team, but, given the video and baggage Kareem Hunt has, as you might expect, the Internet had reactions to the news.

So let me get this straight…drug abuser gets cut and woman beater gets signed. Hey you know that good karma and good feelings from last year? They gone now.

"He took full responsibility"….. 9 months later when the video came out and he was out of a job.

The Browns are going to be a media circus this season.

Unnecessary distraction for a team that finally looks to be doing things right.. guys a top 3 RB, but a domestic abuser. Do people deserve 2nd chances? Yes, but to beat a woman is inexcusable. Not a move I can back

Who knows how this is all going to work out for the Browns and/or Kareem Hunt, but, given his talent, it was probable that some team would take a risk on adding him again. With John Dorsey’s relationship with the running back, it was likely going to be Cleveland, but, for a team on the rise who seems to have changed the culture since Dorsey took over the front office, this move is pretty surprising.