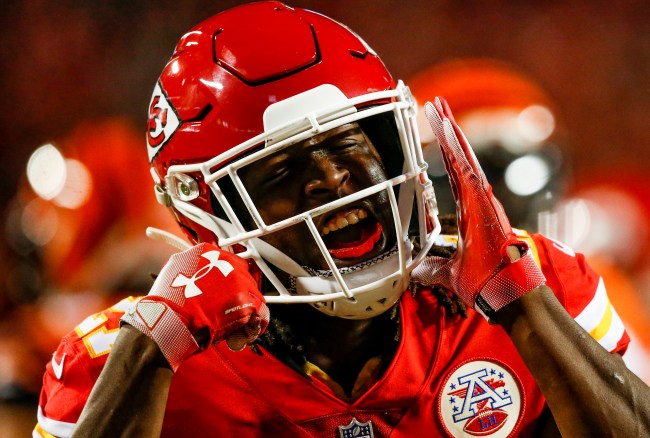 Kareem Hunt and his new team the Cleveland Browns knew he was going to get handed down some sort of suspension from the NFL for the disturbing video of him kicking and shoving a woman in a hotel last spring, but neither probably thought that the league would go with just eight games. To say that the punishment for such a disgusting act is an understatement; and this is coming from a lifelong Browns fan.

According to ESPN’s Adam Schefter, the NFL decided that the eight-game suspension was enough for Kareem Hunt. Here are some tweets from Schefty regarding the Hunt decision, which includes a statement from the player’s agent and Hunt himself.

Statement from Kareem Hunt’s agent Dan Saffron, who is not appealing the eight-game suspension for his client: pic.twitter.com/lJ1s1Ivaek

I’m all about forgiveness and people getting a second chance, but let’s call a spade a spade here: Kareem Hunt got off easy. I know that the NFL, presumably, did a thorough investigation and spoke with police and read the arrest reports, but eight games for doing what was seen on video to a woman just doesn’t seem enough to me. It’s a slap on the wrist that should have probably been about four games more. It’s a sign that the league will continue to support its players for violence like this, and, given the Cleveland Browns just became must-see TV with the additions they’ve made this offseason — with Odell Beckham Jr. headlining that group — it seems fishy that the league may have wanted to make sure Kareem Hunt was around for fans to see the team at full strength offensively.

Given the severity of Kareem Hunt’s incident, there were a lot of people on Twitter who seemed to question the NFL’s decision of eight games. Remember, this is the same league that players are “subject to discipline at the discretion of the Commissioner, including suspension up to six games for a first violation or, if appropriate, termination of the individual’s affiliation with an NFL Club,” according to its 2018 policy on Performance-Enhancing substances. Potentially six games to a year for PEDs or weed, but only eight for cold hard proof of hitting and kicking a woman. That type of confusion lead to some interesting reactions on social media, so take a look below.

So this is your point if I gather it correctly: any nfl player can beat the shit out of a woman as long as he only does it once. He can get his 8 game suspension then go on to play the second half of a season for several million dollars. Am I understanding correctly?

Dang…. Zeke got 6 for allegations.

He should of been suspended for the whole season

He gets to play for a contender in the playoff run. NFL morality is laughable.

Can we reopen that case with Zeke please? Defamation of character?

Nice to know that smoking weed gets you suspended for a full year though. Makes total sense.

8? Damn Dorsey still got him on the cheap for the last 8. pic.twitter.com/Vag4tRu2V0

2019 Kareem Hunt is suspended for 8 games for violating the Personal conduct policy ..

in 2010 Ben roethlisberger was suspend for a Rape charge(violating the personal conduct policy) and suspended for 6 games that got reduced to 4 during the season for GOoD BEHAVIOR.. 😭😂🙆🏾‍♂️

The @NFL is SOFT on domestic violence offenders. It should be cut and dry. Lay your hands on a woman, you’re gone from the league. Plain and simple. There should be no second chances for that crap but the @NFL is all about the 💵 and always will be. It is dispicable.

Kareem Hunt is saying and doing all the right things following the incident and his immediate release from the Kansas City Chiefs last season. He’s, presumably, making the right steps to better himself as a person first and a player and teammate second. But he has to feel like he beat the NFL here by getting only eight games for what he did, and it’s sad to see the league continue to take such a light stance on this type of violence, because they could have really sent a message by suspending Hunt for much longer.