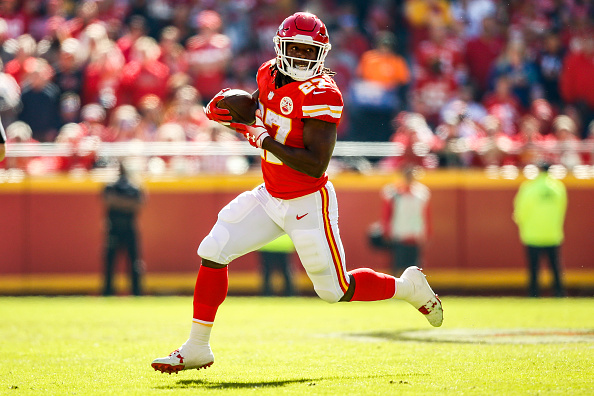 It looks like Kareem Hunt’s season could be in jeopardy after a video of a domestic violence incident from earlier this year has surfaced online.

Back in February, a women claimed that the Chiefs running back had shoved and pushed her in a Cleveland hotel after night of bar-hopping.

a woman said the running back “shoved and pushed” her in downtown Cleveland after a night of bar hopping with Hunt, his friend and others on a party bus. According to the police reports, Hunt’s friend said the woman, 19-year-old Abigail Ottinger, and a friend went back to Hunt’s apartment, but they were kicked out when Hunt and his friends learned they were 19. Ottinger remembered it differently and told police they were kicked out because she “didn’t want” one of the men in the group.

After Ottinger and her friend were removed from the apartment, they reportedly pounded on the apartment door. Another woman in Hunt’s group of friends said Ottinger hit her in the face when she came out and asked them to leave. That’s when, Ottinger told police, Hunt came out of the apartment and “shoved and pushed her.”

We now have video of the incident thanks to TMZ and it doesn’t look good for Hunt.

In the video Hunt could be seen rushing the woman, forcefully pushing her to the ground and then kicking her while she was down.

Here is the woman talking to the police after the incident.

Kareem has not missed a single game this season despite the incident happening MONTHS before the 2018 NFL season kicked off … and team CEO Clark Hunt publicly stated in August he doubted Hunt would be suspended.

Hunt turns a corner and confronts the woman, shoving her hard. The woman strikes him back in the face … and that’s when Hunt goes berserk.

As friends try to hold him back, the 2017 Pro Bowler — who led the league in rushing yards — explodes and knocks one of his friends into the woman … who both go flying into a wall.

Both Kareem’s male friend and the woman appear dazed — but Kareem makes his way over to the female and kicks her while she’s crouching on the ground … knocking her over.

Apparently the Chiefs saw the video for the first time today.

In case you were wondering, the belief is that the Chiefs are learning of this Kareem Hunt video in real time as we are.

The Chiefs are working on a statement regarding Kareem Hunt kicking a woman. Could be released today or tomorrow.

Here is what the team said before the start of the season about Hunt’s incident.

“The team’s made up of a bunch of young men,” Clark Hunt said Saturday. “They’re not always going to make the best decisions, but we have a strong support system, both with the coaching staff and also with our player development department that works with young guys and talks to them about the situations that they want to be in.

“Kareem is a young man, second year in the league, obviously had a very big year on the field last year. I’m sure he learned some lessons this offseason and hopefully won’t be in those kind of situations in the future.”