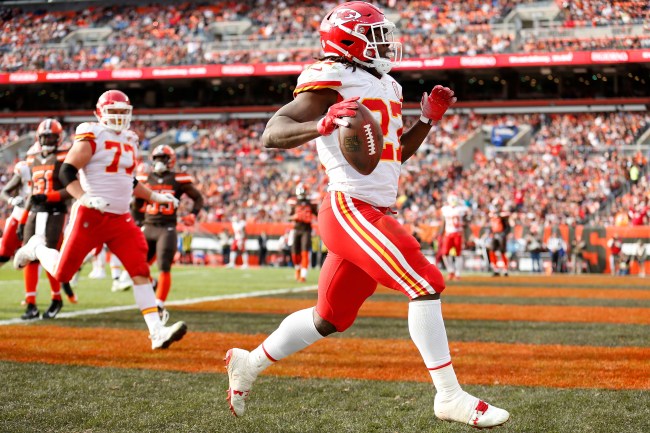 Kareem Hunt may have gotten a second chance from the Cleveland Browns when the team (somewhat shockingly) signed the embattled running back to a one-year deal the other day, but, even with Hunt back on an NFL roster again, he’s still not back to making NFL money again. And it doesn’t look like he’s going to be at that level for at least a couple more years, assuming he stays healthy and performs at a high level following his return to the field.

The #Browns signed RB Kareem Hunt to a 1-year deal that could be worth more than $1M not factoring in the suspension, source said. More than the minimum. After this year, he’ll be an RFA.

While Hunt’s contract was reportedly worth a total of about $1 million after base salary and roster bonuses — a base salary of $645,000 and up to $400,000 in per-game roster bonus — because of the expected suspension he’s going to get handed down by the NFL after a thorough investigation into the hotel incident that led to his release from the Kansas City Chiefs, he’s only going to see a fraction of that cash. Although the league has yet to decide the length of Kareem Hunt’s suspension, some experts believe that it could be lengthy, stretching to 10 or even 12 games this season.

Regardless of how many games Kareem Hunt ultimately misses, based off of the details of Kareem Hunt’s contract, ESPN’s Field Yates did a little math to figure out how much the running back will miss for each game he misses. The result? About $65,000 per game, or, in normal people terms, a pretty decent annual salary.

According to Yates’ breakdown, Kareem Hunt will lose $37,941 in base salary for each game he misses due to suspension, plus an additional $25,000 in a per-game roster bonus, meaning the total cost for each suspended game is $62,941. Man, that’s got to hurt.

While Kareem Hunt won’t receive any guarantee money in his current contract with the Browns, there is some silver lining for Kareem Hunt, because the third-year player can earn an additional $55,000 by participating in the team’s offseason workout program. Hey, that’s not anything to scoff at.

Hunt’s lucky to be back in the league after such an ugly and disturbing incident, so he probably isn’t complaining too much that he’s not getting paid top dollar right now. Plus, if he plays like he has his first two seasons in the NFL, and repairs his image and stays out of more trouble, he should be in line to make a boatload in a couple of years to make up for all this lost money.