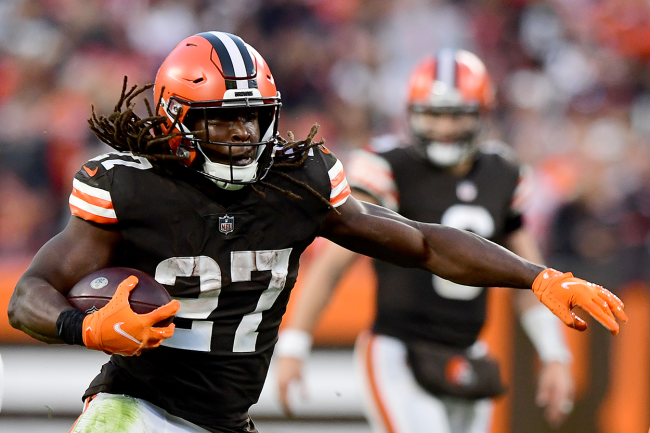 Kareem Hunt has been a part of one of the NFL’s most dynamic running back duos since 2019. He and Nick Chubb anchor the Browns backfield and provide very different skillsets.

While Chubb will run a defender over and drag him all the way into the end zone, Hunt is shiftier and more likely to shake a defender in the open field than lower the shoulder and send him to the turf. But that doesn’t make the latter any less strong or any less willing to run through a would-be tackler.

Hunt, who was drafted out of Toledo in the third round of the NFL draft, has a lot of strength in his lower body. He stands 5-foot-11, 216 pounds and a lot of that weight is carried in his legs.

After suffering a calf injury that kept him out for more than a month in 2021, it does not look like he had any issue getting back to full health during the offseason. Hunt recently arrived in Cleveland to start working toward 2022 with his teammates and his legs — particularly his calves — look massive in a new photo from voluntary workouts.

Despite missing nine games last year, Hunt recorded 78 carries for 386 yards and five touchdowns and 22 catches for 174. Considering that he is back to full health, and getting in work with his teammates before he is required to report, it seems like he is poised for a big year.