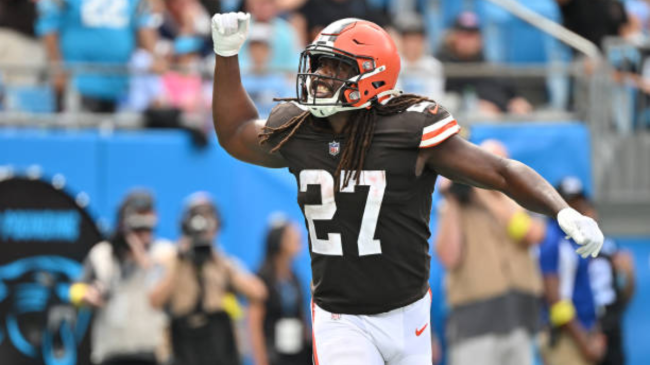 Week 1 was a big week for Kareem Hunt and Nick Chubb. As they have done so many times before, the impressive running back duo was tasked with serving as the centerpiece of the Cleveland Browns offense.

Unsurprisingly, they were up to the task, with Chubb posting 141 yards on 22 carries and Hunt scoring a pair of touchdowns as the Cleveland Browns won their first game following the Baker Mayfield era.

Unfortunately for the two running backs, Browns fans haven’t managed to give them a nickname that is anywhere near deserving of the performances on the field.

It would appear that the best Browns fans could come up with for the dynamic duo is “Chunt”, an unfortunate combination of the two players’ last names.

Today, Hunt reacted to the moniker, with Hunt saying, “It’s all right. Whatever they want to call us. That’s Nick, I’m Kareem.”

Is this really the best they could do? Disregarding how easy it would be for one typo to get somebody in a lot of trouble, it just isn’t really all that appealing of a nickname.

I’m sure Browns fans are more worried about their quarterback situation, Hunt’s holdout, and the franchise’s history of mediocrity, but c’mon, you could at least put a little bit of effort into the nickname.

Maybe Kareem Hunt should try to use this terrible nickname in negotiations as a reason the Browns need to pay him more money to play for them.