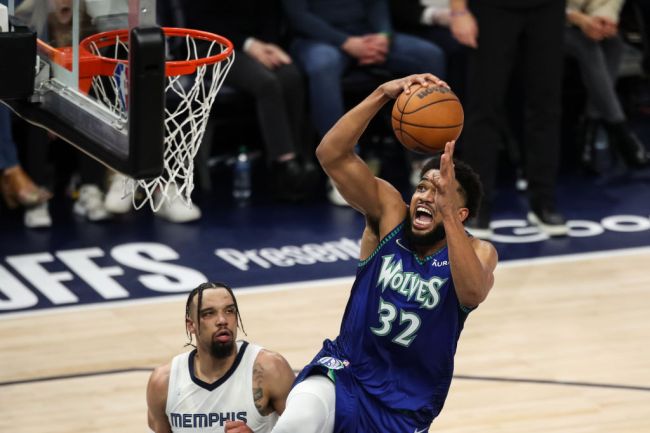 The Minnesota Timberwolves completely changed the NBA’s trade market this offseason when they traded for Rudy Gobert. That deal saw the Timberwolves trade Walker Kessler, 4 first round picks, and 4 more players to acquire the 3-time Defensive Player of the Year.

The move shocked basketball fans and now it seems that it confused the Timberwolves’ biggest star. During an interview today on ESPN, Karl-Anthony Towns was asked about his reaction to the trade.

He revealed that when he was told about the move, he thought the Timberwolves had signed Rudy Gay.

Karl-Anthony Towns thought that the Timberwolves had traded for Rudy Gay 😂 pic.twitter.com/CJsjS5Q03E

I was in London. I was working out and my phone was off, so when I walked back upstairs into the hotel room, my girl was like ‘Did you hear the news?’ And I was like ‘What are you talking about?’ And she said ‘Rudy, you guys got Rudy.’ I didn’t know what she was talking about. I was completely confused. I was like ‘Oh, we signed Rudy, Rudy Gay.’

After telling the world about his confusion, Towns talked about his excitement over the deal and the chance to play alongside Gobert.

I was excited. I didn’t know what was happening but I just saw the vision of us both twin towers out there. What he can do defensively, what I can do offensively, and we all putting that together for one organization, for one team. I think it’s going to be very different.The NBA hasn’t seen something like this. It’s going to be unique, and it’s going to be scary.

The trade for Gobert has given the Timberwolves the league’s most intriguing front court and is just a little bit more exciting than if the T-Wolves had actually acquired Rudy Gay.